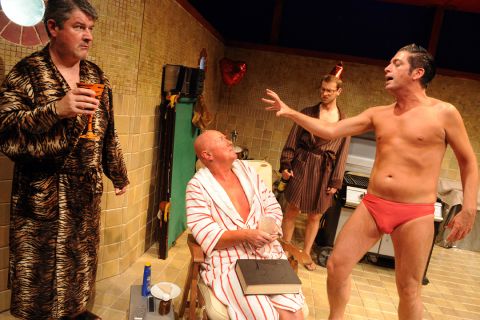 It’s 32°c in Ithaca, and as one of the characters in Enda Walsh’s imagining of Odysseus’ return observes "That’s hot." It gets considerably hotter for the four surviving suitors for the hand of Penelope portrayed here, both figuratively and ultimately literally.

Although set in a swimming pool somewhere in the vicinity of Odysseus’ palace, we are in familiar Walsh territory, as four very different Irishmen bicker, philosophise and prevaricate in the face of their own unavoidable fate.

Ithaca, has, it seems, induced a certain sybaritic state in the ageing juvenile Quinn, the bombastic Dunne, fastidious Fitz and cagey Burns. Doomed to pay court to a Penelope who demands their attention but rejects their suits, they realise they have outstayed their welcome but after twenty years have nowhere to go. Their only release will be the arrival of Odysseus, foreshadowed by their individual but collective dream of what lies in store.

Walsh clearly relishes banging up his characters in locations from which escape is, if not impossible, then certainly almost as unpalatable as remaining where they are. Stasis ought not to be an option for these four, but the ‘game’ of seduction they play so badly has become addictive.

Their protestations can reveal something approaching sincerity, but the roles they adopt have become cosy carapaces from which more authentic selves are only occasionally allowed to escape.

Niall Buggy, Denis Conway, Tadgh Murphy and Karl Shiels bring a genuine strength as well as sense of character to their roles, and an unfaltering sense of what ensemble playing really means.

Druid Theatre Company’s association with Walsh has endured for over four years, and has been a highly productive one (The Walworth Farce, The New Electric Ballroom). It can feel at times, however, that Walsh and Druid are themselves victims of Walsh’s themes of imprisonment and failed escape. As the barbecue spontaneously ignites at the play’s end, signalling hope, if not for the characters, at least for the future, this reviewer’s hope was for even more venturesome further collaboration.