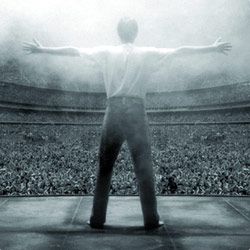 Although nearly 40 years old, Jesus Christ Superstar set in a world of musical celebrity has, with some updates in direction, retained the ability to make you think about how Jesus might have fared in the 21st Century.

Stage by Stage from Exeter bring a youthful cast to the fringe in this production that is full of slick choreography. good production values, and talented young people.

The role of Mary Magdalene is captured in one of the most well-known songs "I don’t know how to love him" and it’s that song that moved this production up a gear for me.

Rebecca Southard, excellent throughout, delivers that song with great feeling and clarity. Judas is central to the story and is one of the biggest parts in the show played energetically by Fletcher Dobinson who leads on many of the rock numbers.

Jesus played convincingly by Jon Bisby is well supported by Molly Joyce as Pilate and Tyler Rainford as Herod.

The show builds and builds from the capture of Jesus in Gethsemane to the scenes where the mob demands his death to the ultimate scenes on the cross. The staging, direction and performance at that point made for riveting theatre as you feel his pain and suffering as if you were almost there.