It's Always Right Now, Until It's Later Review 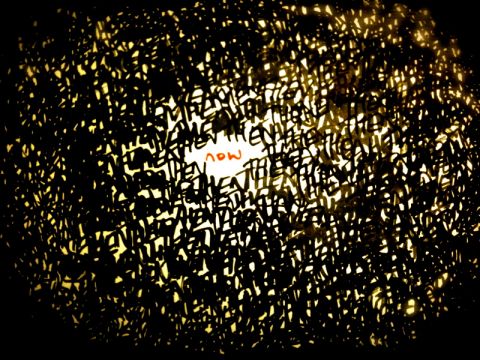 You’d think by this stage in the proceedings, writing about "the blethers", as a friend describes theatre, would be fairly easy. Then along comes a performer such as Daniel Kitson, and the notebook goes in the waste paper basket, and the thesaurus gets hauled off its shelf.

Kitson, already known to Fringe-goers for such ‘previous’ as ‘66a Church Road’, centred on his previous abode, is certainly a man you don’t meet every day. To describe his delivery as ‘stand up‘, or even as ‘storytelling’ is to mislead. Kitson is a performer whose quirks of personality, like those of a much-loved friend, enrich the moments we are in his company.

With only a couple of chairs for company, Kitson talks us through the lives of two ordinary people, William Rivington and Charlotte Carpenter. They never actually meet, and so never talk to each other, become friends, fall in love, or so much as share anything except a single moment in time, in which they are barely aware of one another’s existence. Yet for ninety minutes we follow these characters particular highs and lows, their relationships, hopes, fears and dreams from almost the minute they are born and beyond their deaths.

Slammed hard, but never painfully, against the relentlessness of life, mortality and chronology, we encounter Kitson’s very personal take on what Arnold Bennett describes as ‘the interestingness of existence’. Kitson crafts his comedy with a very literate lust for the beauty and appositeness of the vocabulary he deploys to such considerable effect – he does, after all live in West Yorkshire, Bronte, Hughes and Plath country. It’s not only native wit that Kitson demonstrates, however. We are drawn into this tale – or tales –of ordinary folk through characterisation and a palpable and clearly genuine sympathy with how miraculous ordinary human life really is.