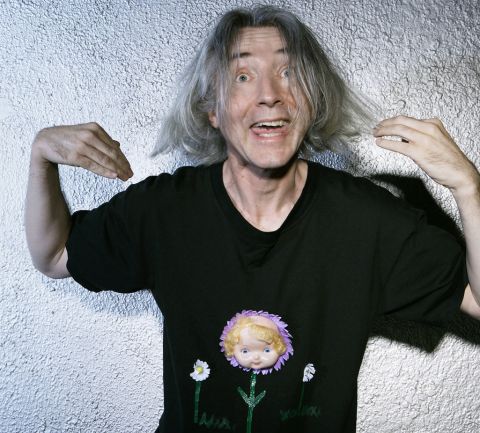 Thoughout his 35 year-long career, the elfin Emo Philips has only been to the Edinburgh Fringe a handful of times, so there is rightly a large buzz about this, his first visitation in 9 years. Famous for his innocent, savant-like performances, disguising an often deliciously black sense of humour, Philips, now 54 stikes an odd figure on stage.

Most people in the UK will only have seen him from footage of his stand up from the 80s, raven-haired and practically skeletal. Looking disarmingly young suited his performance. Now older, gray-haired and now with (only slightly) more meat on his bones, his ability to look as naïve as he used to is diminished somewhat.

This obvious maturity does harm his act, making him less able to surprise his audience with his dark humour. Stories about ex-wives and getting older seem oddly out-of-place and almost too normal for this strange character. However, the sheer quality of his one-liners and meandering stories shines through regardless, allowing any slip-ups or drops in character to fade into the background.

One-liners do make up the majority of his material, jumping from subject to subject, often with no clear connection, but this jumping is made the more interesting for his idiosyncratic speech patterns, often extending words for no clear reason and varying his voice widely in pitch. Not only are his jokes top-quality, but his voice is fascinating to listen to.

The jokes themselves are often self-mocking and suggestive of a hilariously dubious character behind the odd mannerisms. He ranges from discussions on the nature of being an American, to divorce, working life, substance abuse, sex and whimsical flights of fancy, including a very funny series of his own brand of greetings cards and a very short "tribute to Elvis".  Using some of his old material, though masterfully, Philips delivers a top-notch performance here.