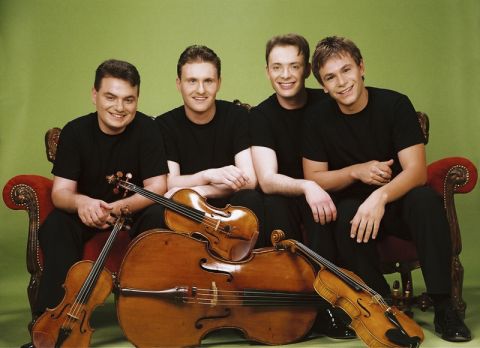 This year's International Festival slogan is "artists without borders," which is why the appearance of cultural ambassadors for Israel - the Jerusalem Quartet - provoked a pro-Palestinian demonstration outside the Queen's Hall this morning as most Palestinian citizens do not have the same freedom of movement as Israelis, living as they do within confined borders. An unusual introduction to a morning chamber recital, the pavements thronged with placards and leaflets. Bags were even searched on entry to the hall, an unprecedented security measure at a concert.

The Quartet, making their debut at the Edinburgh International Festival, arrived on stage. The recital began. Haydn's String Quartet in D Op 76 No 5 was the first piece on the programme. When the musicians were halfway through the second, slow movement we heard a man shouting from the gallery. On looking up, it was a middle-aged protestor. The musicians stopped playing, the shouting continued and they left the stage. The man, resisting, was forcibly removed. The players returned, composed themselves and started the movement again. All was well until the third movement when another man burst into the hall downstairs. Again the music stopped, the players walked off, the man was restrained and escorted away. Once again, the musicians returned - presumably after much agonising as to whether the concert should be cancelled - and managed to finish the Hadyn without further ado.

When the quartet started their next piece - Smetana's String Quartet No 1 in E minor "From my Life" - they and the audience appeared to have finally relaxed into the concert. But this mood was short-lived when a female protestor on the other side of the balcony stood up and shouted protests against the Israeli army. This proved too much for many in the audience. A swell of "boos" erupted around the auditorium accompanied by regular clapping as they shouted "out," "out" to the woman. The musicians of course had already left the stage but one returned. Standing in front of the audience he explained they were there to make music, not get involved in politics and he asked that they be given the peace to continue. The audience responded enthusiastically, and with great whoops and cheers the quartet came back on and resumed the movement.

They got to the second movement and again, in this orchestrated demonstration, another female protestor stood up. The same procedure was re-enacted - musicians walked off, she was escorted out. Finally though, the Director of the International Festival announced to all that there were more movements in the pieces the musicians were going to play than the number of protestors in the hall and that as the International Festival had been host to the Palestinian National Theatre why should not the Israelis also be given a platform. With these sage words, no more dissenting voices were heard in the hall, and the Smetana was finished.

After the interval, which was much later than anticipated and involved much animated discussion about the recent events, we were able to hear, uninterrupted (apart from the lead violinist's bow string snapping and having to be replaced!), all four movements of Brahms' String Quartet in A minor Op 51 No 2. This composition is considered to be Brahms' "masterwork" and we were finally given an opportunity to hear why these relatively young musicians are in such demand on the international stage.

Dynamic players, they interpret the range of musical passages with assertion, and confidence. Having been friends since teenage years, they musically interact with one another effectively and effortlessly and created for the audience a memorable passionate performance.