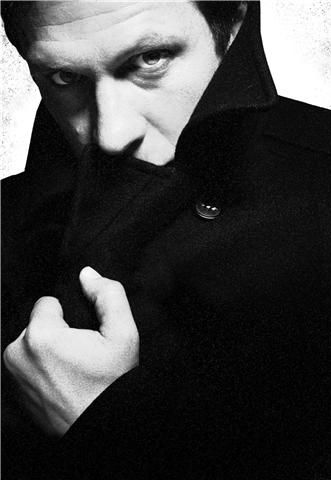 Let’s start with a confession and a promise. The confession
is that, before this, I had never seen anything directed by Steven Berkoff. The
promise is that this will be the only review of his production of On the
Waterfront this Fringe that doesn’t mention Marlon Brando. (Apart from that
mention just now. That didn’t count, OK?)

On a bare stage bisected by crossed lines, against a huge
silhouette of Liberty wielding a stevedore’s hook, the mythic reach of Budd
Schulberg’s indestructible tale of a failed boxer who somehow finds the courage
to stand up to the Mob is perfectly set. The drab tans and greys of the
trenchcoated, fedora-wearing mobsters blend elegantly with the black shadowed
edges of this hard man’s world. It is, as Berkoff has said, a work that has at
its heart a belief in the importance of belonging to a group, something he
underlines again and again in the use of tableaux and smoothly choreographed
routines that throw into relief the architecture of the tribe.

Simon Merrells, as Terry Malloy, gives a beautifully
controlled performance full of contained power. It would be easy to exaggerate
the swagger or the Hamlet-like stasis which are both key elements of Malloy’s
character, but Merrells balances the part superbly. Robin Kingsland, as his
brother Charley, is also amazingly good. The famous scene in which Terry tells
Charley that it was Charley’s crookedness that scuppered Terry’s boxing career
has the audience entranced.

Supporting this feast for the eyes is an equally tasty treat
for the ears. A flexible, dynamic mix of jazz, blues and early rock n roll is
counterpointed with punchy live drumming, all under the auspices of the hugely
talented Mark Glentworth.

This is theatre with passion, honesty and style to
burn. Make sure you catch it while you can.