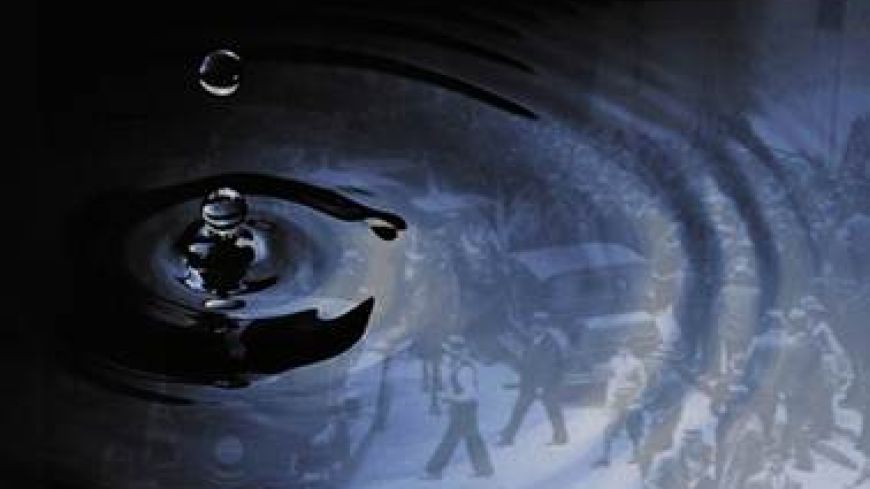 Bakelite phones and some great ‘30s blues and swing music, along with Yip Harburg’s heart rending anthem to the Depression, Brother, Can you spare a dime?, set the tone for the latest production from Edinburgh Theatre Arts. The beautifully blended voices of the cast singing a patriotic Illinois round the radio mikes set the place and enhanced the tone.

It focusses on a young idealist, Charles Lang (David McCallum) who has invented an engine powered by distilled water. To make this and his dream of ‘no more factories’ come true, he has to get a patent and that means doing deals with the world of big business. Their agendas are in diametric opposition. Lang believes that ‘We are all made of light’, and that his engine ‘draws power from the earth’. Lawyer Oberman, played with quiet menace by Danny Farrimond has his eye on the main chance. He uses sophistry to accuse Lang, like in the Johnny Cash song One Piece at a Time, of making his engine from parts from the factory that employed him, making the engine belong to his employers, not him. In this 20th century version of David and Goliath, tragedy ultimately ensues in Goliath’s favour through greed and blackmail, the downside of the so-called free market. The poor jakey sitting simultaneously on stage while the dirty dealings of the lawyer are taking place is a powerful physical metaphor of the time.

The 1934 Century of Progress Exposition held in Chicago, meant to give hope of future progress in a time of depression, poverty and unemployment, is a poignant backdrop to the play. This, with the speeches from corner political agitators and the street calls of ‘knives to grind’, the bell boy’s elevator call ‘going down’ and the attendant’s announcing ‘the Fair is closing’ were highly symbolic. However, the plays punctuation by quotes from a chain letter was confusing. Its relevance is lost until the programme reveals that in 1935 a ‘send a dime’ chain letter campaign, using the emotive biblical phrase of ‘faith, hope and charity’ spread at such a rate that it brought Denver post office to its knees. The delivery of mail as well as the idea of connectedness proves to be ultimately significant with Lang using the Chain Letter and the post office to save his threatened blueprint. The Chain Letter, physically represented by Jean Anthony, appears as a kind of commentator with her constant mantra of ‘Do not break the chain.’

The changes made by the cast, even within the simple set of grey walls and dull mushroom brown furniture sometimes felt clumsy but this play was a stage play trying to be a radio play. Fittingly, the sounds were brilliantly accomplished, which is fine testament to Colin McPherson and Edith Peers. The Chicago Radio extract may have been part of the original recording but its inclusion was an element adding more authenticity to this period piece.

The company’s costumes from Fran Morrice were attractive, detailed and over all pretty sensitive to the period. Cloche hats, crew cuts, bow ties, Fair Isle slipovers, knickerbockers, trench coats, sharp suits, tweed suits, braces (should that be suspenders?) and lovely shoes and boots - the sartorial spectrum was covered with style. It is not easy to achieve accurate accents when a play clearly demands it as in this case but the cast all made a good go at it, some better than others, but no mean feat to sustain. Within this impressive production, there were outstanding performances from Colin McPherson, Danny Farrimond, Stuart Mitchell and David Gibson who each had strong stage presence with all of the various roles they undertook and Sam Morwood as Bernie Wallace shows promise as a very young actor. David McCallum gives an intense, committed performance as Charles Lang and Verity Simpson is calm and convincing as Lang’s blind sister Rita.

This is an ambitious production from a local company in a production exposing the folly of innocence pitting itself against hard headed avarice.