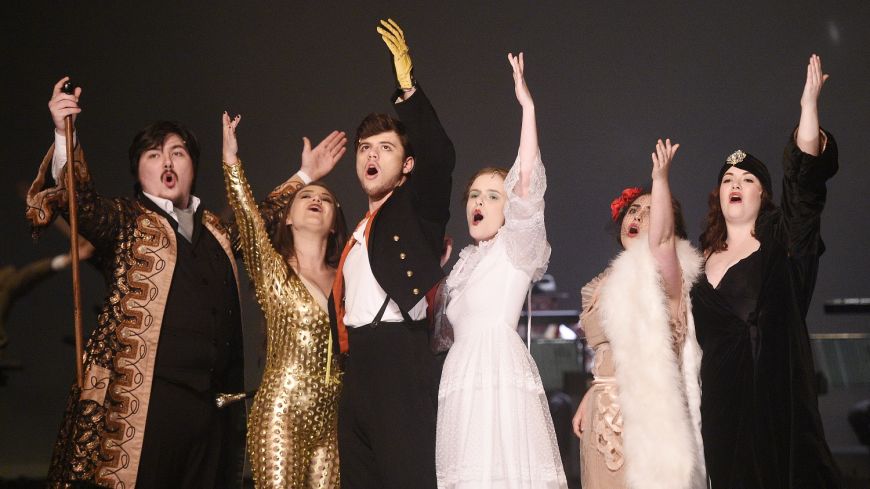 Bertolt Brecht’s The Threepenny Opera, based on John Gay’s 18th century The Beggar’s Opera, opened in Berlin in 1928. 90 years later, The Attic Collective breathes some fresh young Edinburgh life into his musical satire on the middle classes and capitalism while maintaining a knowingly thin façade that we are in London’s Soho just before the coronation of Victoria.

This sprawling ‘play with music’ tells the story of the machinations in the underworld when arch manipulator Jonathan Peacham (Max Reid) wants to corner and catch arch crim Macheath, played commandingly and with great maturity by 18-year-old Charlie West. Peacham, whose dodgy operation is the control of the city’s beggars, discovers that his only daughter Polly (Kirsty Punton) has married the cane carrying, kid glove wearing dandy known as Macheath or Mack the Knife. His nickname says it all but he has dodged the jail because his best friend and former comrade in arms is the Chief of Police, Tiger Brown (Andrew Cameron). Peacham in his fury sets out to rectify that and have Mackie hanged.

The stage of the King’s Theatre is stripped back to its bare essentials to accommodate Brecht’s stripped back theatre and The Attic Collective has even incorporated a cleverly handled ‘hitch’ to allow another layer of ‘hand held’ theatre. This bold troupe of pimps, whores and comic singers smash the fourth wall by inhabiting the auditorium with the style that cloaks the entire performance. All this bravura is accompanied by music played with the tinny dignity of Weimar by a small band at the back of the stage.

The seriously good singing voices across the cast bring Kurt Weill’s music to life and their dancing skills are a pleasure to watch as couples impressively step a measured light fantastic over the stage. Rather than do cod Cockney or London accents, the cast sticks to their own in their creation of a kind of Edinburgh Soho that works well.

The Attic Collective is simply bursting at the seams with talent but notable among the cast is Conor McLeod doing a great turn as the pastor with the dodgy cassock and Andrew Cameron with his portrayal of the barely contained love of Police Commander, Tiger Brown for the man on the other side of the tracks, Mackie.

Kirsty Punton is an assured and accomplished presence as Polly Peacham from the start, covering the gamut of emotions with a sure foot.

Then there is Imogen Reiter as Coaxer. Her character may not have much dialogue but her face spoke volumes throughout with her wide eye studied boredom as she cycles in background before going in to a 19th century version of the hand jive then becoming a moustachioed policeman. Both young women are outstanding.

The Attic Collective is a new Scottish theatre company for emerging actors aged from 18-26 and The Threepenny Opera is only their third production but they are already proving to be not only an ambitious but a formidable presence. Scottish theatre should be in good hands in the future with this lot around!