The Stornoway Way, The Studio at the Festival Theatre, Review 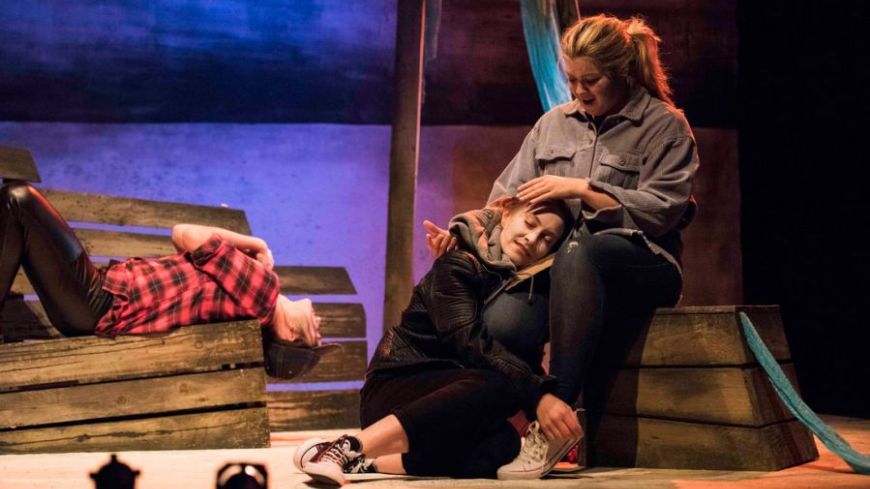 Based on playwright Kevin MacNeil’s own book, The Stornoway Way in theatrical form is a different manifestation, with the original single male voice transformed into three female performers of the story. This is an interesting route to go down and reflects the social issues of disenfranchised young people of all sexes: the difficulty that relatively isolated settings – such as living on an island - can bring for those who struggle to find their own path. The three actors work well together and move comfortably between roles, songs and off stage interaction. Within the heart of the tale is the Gaelic language, and, while the majority of the production is in English, the Gaelic songs are where the hidden emotions are set free.

Director Matthew Zajac uses a varied mix of styles: part-Brechtian, part gig theatre, part story-telling, making full use of breaking the fourth wall and displaying all actors, sound effects and set changes in full view. As a piece of social commentary, it makes sense to implement elements of Brecht, allowing moments of humour to peek into what could otherwise be a overwhelmingly depressing tale of the impact of addiction. Into the mix is gig theatre, a style on the rise as a way of bringing music into a theatrical setting, and, as a crossover style of song performance, it also makes sense. This is a tale of a tortured singer-songwriter, and, indeed, the Gaelic and English songs fit very well into the piece, enhancing it rather than detracting from the core story. Paradoxically, while these elements complement the content, the pace of the overall play still feels somewhat slow, particularly in the first act.

The set design is made to be extremely adaptable and is impressive when moved into different formations. In particular, the multi-functional backdrop is striking; at first it appears deceptively simple, a muted backdrop depicting water and the edge of the island, but as video projections appear, the transformation is immediate, and alternative scenes are effortlessly created, drawing the eye of the audience into the space. It works equally well as a display space for translations of the Gaelic that peppers the piece.

Overall, this is an engaging production and, while the diverse elements may not fit as snugly as they could, it is an enjoyable watch.