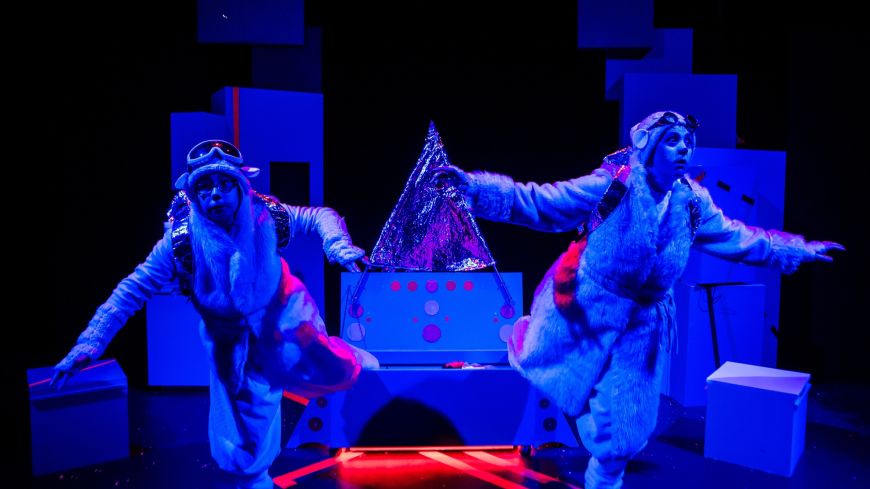 Some twittering birdsong and gentle music welcomes the tiny tots and their parents/carers to this latest adventure from the two benign Polar Bears who went wild with their last show.

A series of blue cubes and cuboids sit on a stage striped here and there in pink and orange before the two friendly ursine characters start their day by sniffing and scratching each other before breakfast. When a mysterious box arrives at their door, it creates enormous curiosity involving some mystified knocking on the sides of the box (bringing the spontaneous shout “Silly Polar Bears!” from a wee chap in the audience). Turns out the box contains a shiny star balloon but no sooner have the three made friends than the balloon flies off. So off the Bears go on a quest to get it back.

Their journey to be re-united with their new pal means some inventive thinking of how to get from earth to the sky with no wings. With perfect co-ordination throughout, they move higher and higher from a trampoline to a tree; from a high rise lift to a cable car; from a plane to a rocket all delightfully created with hints of magic and illusion.

This visually entrancing piece of children’s theatre, done to some fine piano sounds, is perfectly pitched at its age range as the infectious helpless giggles that it attracts prove. Children love jokes about body noises and there are plenty in this otherwise silent show with beautifully choreographed miming and dancing worthy of Laurel and Hardy along with their own signature white furry bum swaying.

With a lovely inclusive ending à la Slava, this charming, playful show holds the deeper message that if something extra special comes in to your life it pays to go out of your way to keep it there.

This is the last leg of the deaf friendly show’s 2016 UK tour that started on 6 May at Perth Horsecross.