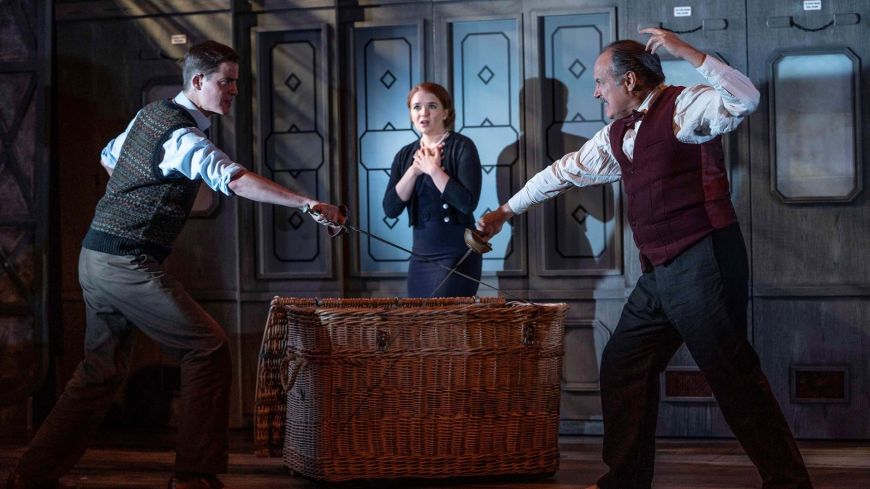 The Lady Vanishes is a predictable thriller but in the most satisfying way. It has intrigue, disguises, colourful characters, a classic questioning of sanity, fight scenes, you name it. Set in the ornate and glorious King’s Theatre, a night out to this play, in particular, feels very luxe indeed.

It opens on a train station in Hitler's invaded Austria, but the English passengers waiting to board a train to Zurich are concerned with their own affairs rather than with political unrest. Iris Henderson, a rather posh and pompous young thing, wants to get back home to her fiancé. One British couple has run off from their spouses to have… gasp! an affair. Another duo is a banter-full pair of English chaps that just want to get to the Big Game on time. They, along with the other train passengers, play their part in unravelling the sinister business of the missing Miss Froy, a middle-aged self-proclaimed governess, who shared a train car and a cuppa with Iris, then disappeared. When Iris implores the nearby passengers to divulge her whereabouts, none of them claims they ever saw her. Is Iris mad or is it a conspiracy?

This piece feels more half-comedy-half-thriller, but that’s not unwelcome. Perhaps it doesn’t have quite the zing that comes with more jaw-dropping plot twists, but it is enjoyable nonetheless. Train travel has an undeniable quality of romance, and that setting is certainly felt here with the design of the set; additionally, the close-quarters of a train carriage adds to the farce, with characters running about between cabins and switching to and from dining car scenes. Though at first a bit heavy-handed in her delivery, Lorna Fitzgerald as Iris plays her role well, and her counterpart sleuth in Matt Barber as Max is quite amusing. Juliet Mills as Miss Froy is lovely. The ending is cloying, but also has a quirky nod to the famed Hitchcock cameo, which is a nice Easter egg for fans of the movie.

The Classic Thriller Theatre Company doesn’t pretend to reinvent the wheel with this staged version of Alfred Hitchcock’s 1938 The Lady Vanishes, but it delivers just what its name suggests, a classic thriller play.