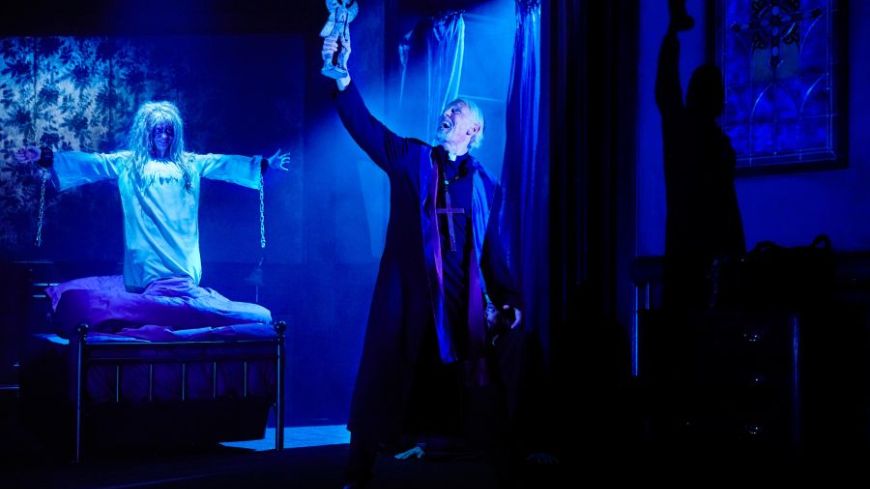 William Friedkin’s 1973 Academy Award-winning film adaption of William Peter Blatty's 1971 critically acclaimed novel electrified audiences and gained a cult following. Forty five years on, the psychological thriller has the parts to be a visually shocking, intellectual and haunting theatrical experience, but the edgy atmosphere created at the opening – with the audience abruptly plunged into darkness, causing shrieks and laughs – fails to be retained with a melodramatic air ensuring little emotional investment.

Inspired by a real case in Maryland from 1949, we follow the story of the demonic possession of 12-year-old Regan MacNeil (Susannah Edgley), daughter of actress Chris (Sophie Ward). As medical science can’t explain Regan’s violent, sexual and erratic behaviour, her troubled mother turns to Father Damien Karras (Ben Caplan) – a psychiatrist and priest who is battling his own demons.

The true horror of The Exorcist is the exploitation of the innocent or vulnerable for selfish or harmful gains as it explores faith and belief, good and evil. In the presence of evil, we should be beyond gripped; however, Sean Mathias directs with a simplicity that fails to create anywhere close to the nerve-shredding tension projected on the silver screen equivalent, with a relaxed audience who were engaged but not transported.

Special effects are a key element to this show, with bed-rocking, 360-degree head spins and projectile vomiting delivered with mixed results. Anna Fleischle’s American-gothic set eerily shape shifts adding a level of claustrophobia, accompanied by Adam Cork’s sounds adding atmospheric tension that unfortunately doesn’t carry through to the characters, with a histrionic delivery that keeps the audience from being drawn into the unnerving mystery at the stories core.

Pielmeier's script includes most memorable moments from the novel and film, but the relationship between the demon and Merrin is not nearly exploited enough onstage, leading to a lack of weight for the final confrontation.

The choice of Ian McKellan as the voice of the demon too, while a wonderful performance, may also be questioned in terms of intent. There is very little that is terrifying about Gandalf, no matter how many swear words he says, and as Regan’s possessed body lip syncs to this version of evil, it all feels a bit camp with no threat felt from the entity in front of us, live on stage.

Susannah Edgley – who starred in the West End run – deserves commendation however as she delivers a strong performance, transitioning from sweet young girl to thrashing, satanic demon, with excellent lip syncing and commitment to a physically and emotionally demanding role, despite its limitations to actually scare us.

A gripping story which isn’t executed to its full potential, creating more guffaws than screams.