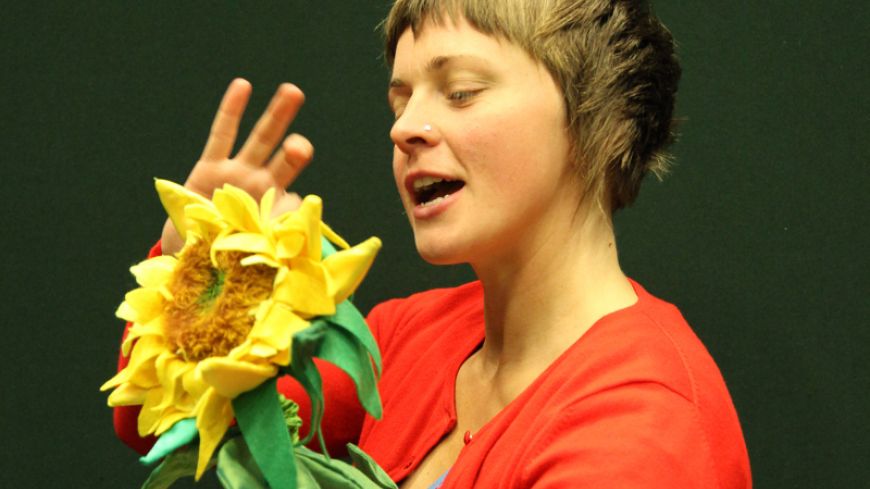 Dressed in flat cap and corduroys, the precise and tidy Frank (Luke Walker) inhabits the safe and ordered world of his allotment where part of his familiar routine is the highlight of reading the regular postcards from his daughter and grandson in Australia.

The vacant Number 12 allotment next to him that had been run by his pal is now under the care of Isabella (Eve Robertson), a young, zany eastern European.  After initial hostility on Frank’s part, the two very different characters make hesitant steps into each other’s worlds towards neighbourly living and even genuine friendship where new challenges   are met.

The busy, beautiful set is a clever symbol of the two characters with the bright and exuberant Isabella planting glorious flowers and the beige, conventional Frank growing sensible root vegetables.  However, when they are harvested, they are of course beautiful in their own way and are exquisitely made by the M6 props team. Similarly, the music from Tayo Akinbode moves from the gentle plinky- plonk sound of the ukulele and harmonica to a trumpeting oompah –pah when Isabella appears.

The chickens, cleverly portrayed in puppet form, seemed like a nightmare at first to Frank but his finding a white feather in his hut may have been an angelic portent.  He soon starts to see the world anew and his hard shell of loneliness starts to crack thanks to the kindness of the gift of eggs from the equally lonely Isabella.

This is an enchanting wee drama about the possibility of friendship between different ages, genders and nationalities.  It is about kindness between people whose real families are far away but who find that sharing and helping with new people can, in the words of Isabella’s Grandmother, “make your world beautiful …fill it with love…”

The mannerly Frank and the manic Isabella are shown “making the most of life” within the time honoured metaphor of a garden where new shoots are always possible even after disappointment and remorse.  Their happy dancing to the fabulous Django Rheinhart’s Palm Court bee bop (okay, Gypsy Jazz) I’se a Muggin, between the cultivating of their gardens, was a joy to behold.

This touching tale aimed at 5+ year olds was watched on Saturday by a mostly adult audience; a great pity as it carried a fine message within a thoroughly engaging performance.