Stones in His Pockets,The Brunton, Review 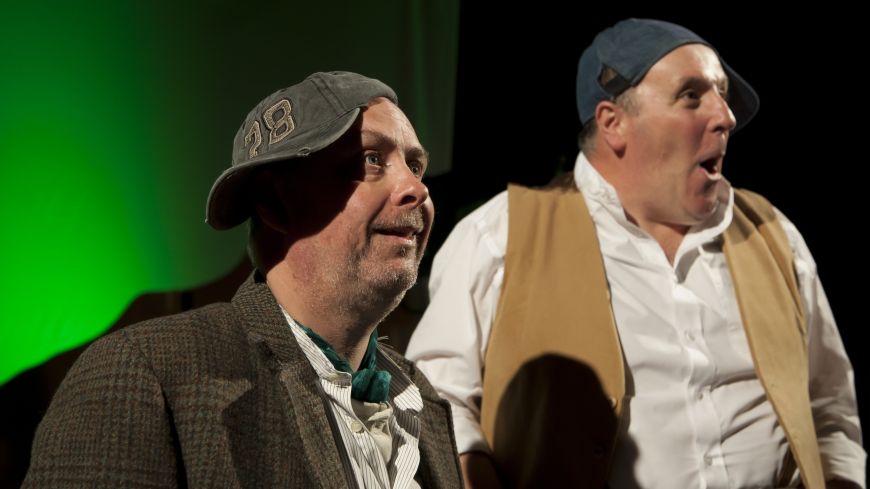 What happens when harsh reality sidles its way through a creation of fantasy?

A US film crew arrives in County Kerry to shoot The Quiet Valley, their latest misty eyed vision of Ireland. Charlie Conlon (Barrie Hunter) and Jake Quinn (Alasdair McCrone) are among the locals recruited as extras. Young Sean Harkin creates a real life drama mid shoot that throws up moral dilemmas and blame with faint echoes of Priestley’s An Inspector Calls in this version of 1996 award winning tragi- comedy from Belfast writer Marie Jones.

The lesson embedded in the story about the lack of hope in people deprived of self -esteem where an escape through drugs and movies is a comfort is poignant. Add to that the pertinent pointing up of the insensitivity of the filmmakers who forget whose turf it is that’s being cut and you have some powerful messages but these issues are a little lost in the levity.

The two actors take on a multitude of roles that include the last extra from The Quiet Man; a Scottish heavy; Ashley the tea girl; the film’s director; glamorous leading lady Caroline and hoodie Sean Harkin, the female characters being less convincing than the others. It’s a bit like The Fast Show with fewer props and even fewer actors. With its playful and comic style and speed of character change, it feels like a platform for exercising acting skills rather than a complete piece of theatre.

When some of the awe felt towards the filmmakers evaporates and the discrepancy between their pittance of a daily payment and the big bucks the film will harvest dawns, the bluster of the would be movie stars goes. Charlie’s virgin script may not be up to the mark, but a new film involving cows ‘where extras are stars and stars are extras’ would be more rooted in truth and reality.

Stones in His Pockets is updated by Comar and Mull Theatre Productions at a time of recent turmoil for the companies and on a personal level for Alasdair McCrone. The sterling performances from him and Barrie Hunter are testament to their ethos and commitment to theatre showing that, for very different reasons to the fictional filmmakers, the show must go on.