Stick By Me, The Studio, Review 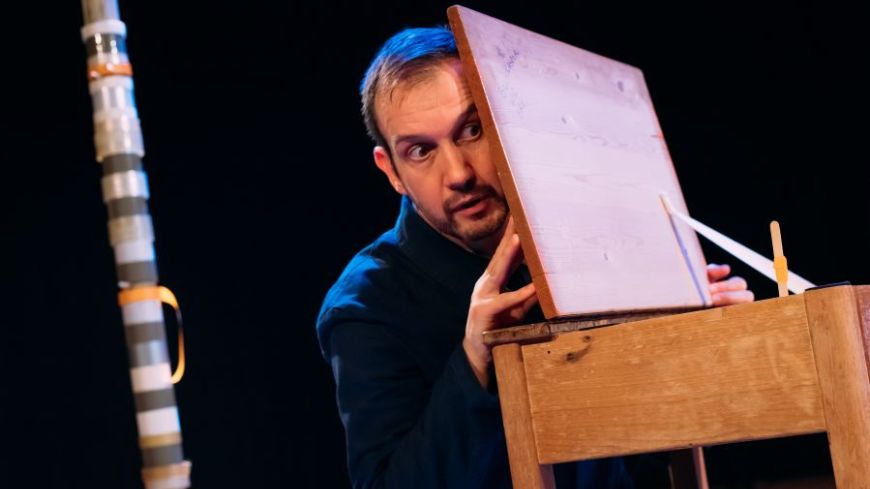 From babies in arms to active toddlers, they all sit wide-eyed staring up at this whimsical man and his silly behaviour. This simple yet effective piece explores the power of imagination and the friendship between a young boy and his ice-lolly stick.

The unnamed character explores his surroundings being told ‘no’ by a disembodied voice when he strays too far. The set is stripped back and made of simple household items. Rolls of tape placed on metal poles, a wooden desk, chair and a cardboard box. There is no need for fancy props; the importance is placed on the characters' imagination, thus opening up to the audience on how they can play the game at home. At moments the set becomes interactive, dropping hundreds of sticks from the sky. The various lighting and sound cues are perfectly in time with the performance, always hitting their marks just right.

Andy Manley remains mute throughout his performance allowing the children space to squeal, shout and question with the safe assurance they won’t disrupt or lose track of the narrative. Manley reflects their child-like innocence, curiosity and wonder in his playful performance. He is clearly not a professional dancer or clowning expert, but the young audience members remain transfixed throughout, shouting out suggestions and questions: ‘He’s hiding’; ‘What’s he doing?’ One child, clearly horrified by the mess, even began scolding him with, ‘That’s enough.’ This is a joyful experience that had the parents giggling along, too.

A charming and simple piece which really captivates its target audience.

This production has finished its run at The Studio but is now on tour.