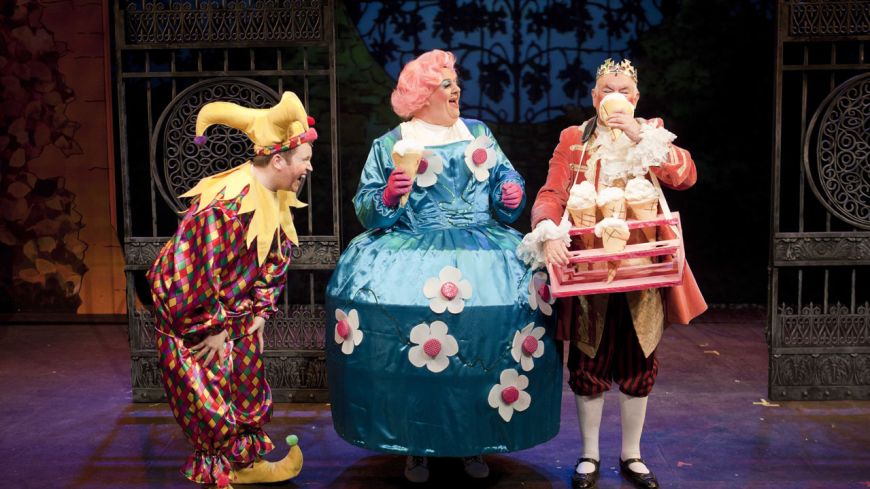 A braw panto tale is spun out in style with this version of Sleeping Beauty.

In a huffy revenge, the wicked (not witchy) Nightshade casts an evil spell over the baby Princess. But all is not lost! Aurora has a godmother in Fairy Thistledown (Kirsty Malone) who helps to save the day.

In this version of the classic tale, full of puns and local jokes from the witty pen of Philip Meeks, there is a bit of pre-destination. There is no queue of sword wielding royals with their lips puckered up ready for a kiss. The only prince in the running for the role of wakening the long sleeping princess is Prince Finlay (Stephen Arden) of thon equally weel kent monarchy, Fisherrow. That particular bit of belt tightening was absorbed nicely into the script.

A technical hiccough involving a projector breakdown meant a bit of a weak start but it soon warmed up to a good pace and the lack of a whizz bang backdrop did not detract from this great piece of old fashioned fun. In fact the old style stage curtain that comes down between acts showing Musselburgh High Street, with its echoes of old variety shows, is completely right for this traditional pantomime where sweetie flinging at the audience goes down a storm even in days of relative affluence.

This slightly new spin on an old story is, rightly, only cautiously risqué, erring on the side of being good natured rather than too rude natured. There is slapstick and general corny humour from Ryan Paterson as Chuckles the Jester who did a grand job of getting the audience involved in panto shouting and clapping.

The songs are not restricted to current chart hits and include old favourites from The Monkees, Lulu and The Supremes acknowledging the wide age range that attends panto but throwing in the new Oxford dictionary entry ‘twerk’ gives some street cred to the proceedings!

Sophie Ferguson’s costumes were by turn bright, cheery and suitably cheeky though the dancers’ shoes that looked like black sannies could have done with being tarted up a bit to be in keeping with their delicate image of Flower Fairies and Francis Gallop’s metallic design of Fairy Nightshade’s lair is a work of art in itself! This top notch professional cast gets the audience totally on board over the panto’s two acts through to its rousing, rocking, inclusive finale.

This production is definitely not a “junction 39 – a Musselburgh turn off!” so swashbuckle your way through that metaphorical forest out to The Honest Toun and win your way to the prize of Brunton’s Sleeping Beauty!