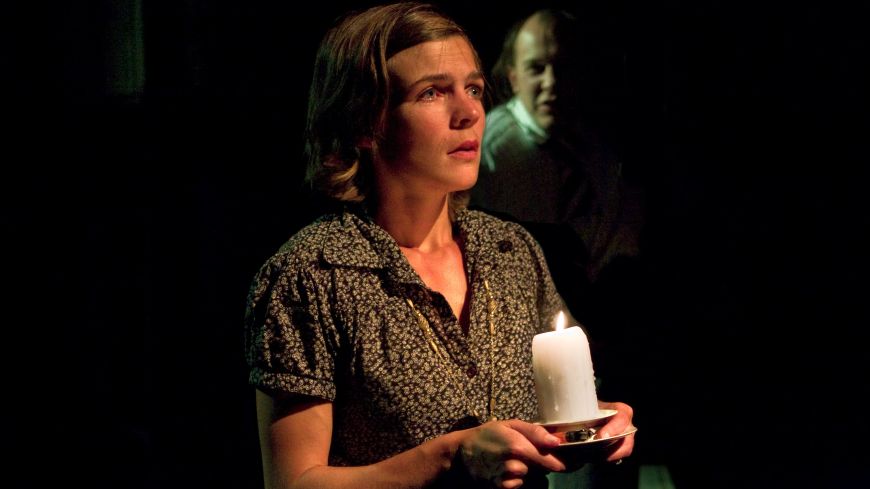 Musselburgh’s Brunton Theatre was an apt venue for this re-telling of the dark tale from the Brothers Grimm that has been set in a place called Scallop Street and refers to a Mussel Beach.

This tale of greed and desperation, covetousness and compromise, tells of a village miller who is so ambitious for his cello-playing daughter, Esmiralda, to make a good marriage that he lies to the local prince that she can spin straw to gold.

The prince demands that she spin a room full of straw in to gold in three days or her father will die.  Esmiralda is devastated with the impossible task facing her, so is willing to give anything to the goblin that appears offering to help.

When she runs out of treasures to give him, like her dead mother’s ruby necklace, she has to promise her first born child to this ‘dwarf with no feelings’.

When Esmiralda marries the prince and the child is actually born, she regrets the promise but can only get out of the bargain if she can find the name of the mystery spinner, Rumpelstiltskin, and of course she does with the help of her family and friends.

The set is a simple one with several blue topped wooden structures scattered on the stage, one holding a symbolic bale of hay, and a background of rough forest that looked like broccoli mounted on a metal grid. The piece opens with birdsong and live music from a cello and a fairy lit piano, played respectively by Esmiralda and the Miller.

The traditional story is broadly stuck to in this adaptation, with contemporary costumes and the inclusion of music giving a new slant.  It is a pity that it was recorded music that ended the play with the cello the only live instrument. One character, Desirée, doubled as a narrator but her role was strange as she delivered dialogue of characters who were on stage rather than fill in gaps in the story that could not be performed.

The stage often seemed crowded and there was a sense that while the actors played their individual roles well, the production itself seemed raw and a bit heavy handed and the dénouement seemed rushed.

There were parts that were quite sexual and tipped just a bit too much in to an adult show (the programme recommends 8+ years old) and left a feeling of ill ease in a children’s festival.  In saying that, the children in the audience were greatly outnumbered by adults.

The lonely and motherless character, Rumpelstiltskin, was mostly referred to as a dwarf, yet appeared in high waisted trousers that made him look bizarrely tall, his high heels adding to the singular effect.  His ‘maniacal dancing’ before he gets the baby is oddly shown on stage as him quietly playing a sweet music box.  Making him a fossilised garden gnome gave a comic modern twist on the various fates that he has been through in versions of the tale.

Maybe there is a significance that I am missing, but the soap making references were a bit of a mystery and added nothing to the story. Sadly, this production lacked something and was not quite childish enough or poignant enough to make it a magical experience.

In the tradition of Bank of Scotland Imaginate shows, the housekeeping announcement is a recording made by a child and includes ‘no snacks in the auditorium’.  Perhaps adult shows, especially cinemas, could take a leaf out of their book.