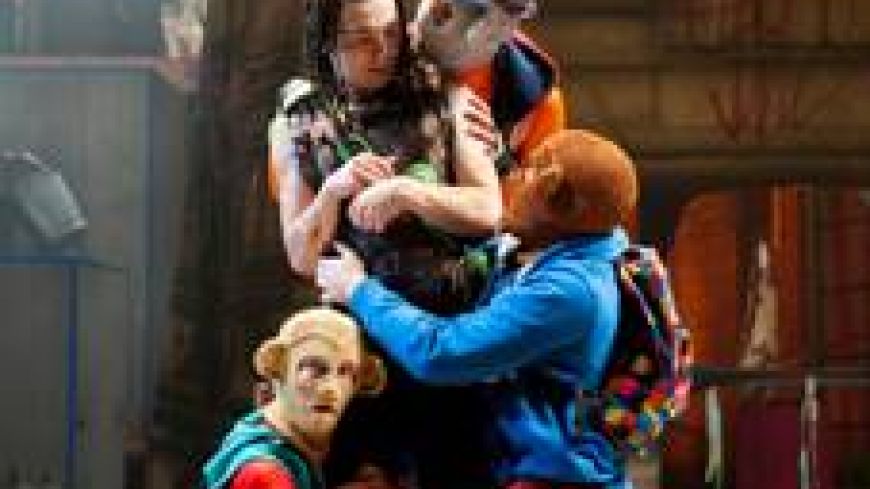 Rudyard Kipling’s The Jungle Book is an ambitious and unusual choice of Christmas show. The animated film version has placed it in the minds of the public as a cute, comic and cuddly world filled of course with its fabulously memorable music. The original story of Mowgli is an altogether darker tale.

Kipling’s moral fables are told through the anthropomorphising of animals. When Mowgli (Jake Davies) the ‘man cub’ is found in the Indian jungle, having escaped the jaws of Shere Khan the tiger (Lanre Malaolu), he is brought up, in time honoured tradition, by wolves. His allies, Baloo the bear and Bagheera the panther, as well of course as his surrogate lupine parents, Akela (Jack Lord) and Raksha (Loren O’Dair), teach him how to survive Shere Khan’s revenge by the laws of the jungle. Ultimately though, Mowgli has to decide if he wants to hear ‘four feet trotting behind’ or just the two.

Stuart Paterson holds a reputation for creating seriously good Christmas shows but this particular production is too fierce and largely humourless for this time of year. It is dark and menacing, with not quite enough direct engagement with the audience.

There is not so much redemption here as a take on David and Goliath with little Mowgli defeating the evil Shere Khan, magnificently portrayed by Lanre Malaolu in gold dripping gangsta rapper style. His physicality in the part was powerful and commanding, the beast’s dragging leg maintained throughout, a disability seemingly omitted from thon film. Sadly the dramatic death of the magnificent Shere Khan was met with audience giggles.

The red and green creepers that hang on the stage to create a feral street- style jungle are draped like a circus tent in the cosy auditorium of the Citizen’s Theatre. The circus rope, pole and harness held a promise that was largely unfulfilled. Apart from Kaa, fabulously played by Elexi Walker with her slithery, slinky movements as she threatens to consume some poor guy in the stalls, there was little actual rope swinging and only some mild acrobatics more of which may have added excitement to this show.

The frog chorus brought some daft humour to an otherwise earnest production and Jorell Coiffic-Kamall as a sleek bow-tied Bagheera the panther brought some impressive animalistic morphing to the stage along with whoever donned the elephant costume. Chris Donald as Ban, the leader of the monkeys and the only Scottish actor in this nine- strong cast, led his swaggering pack of masters of mischief in their cheeky balaclavaed masks with suitable misrule. The dual role of wolf and human mother is clever but the use of the secret animal language is not fully capitalised on with Mowgli mostly speaking in a human language even when he first meets the humans!

This is an interesting re-imagining of Kipling’s classic by Nikolai Foster that may have been more appropriate at another time of year.