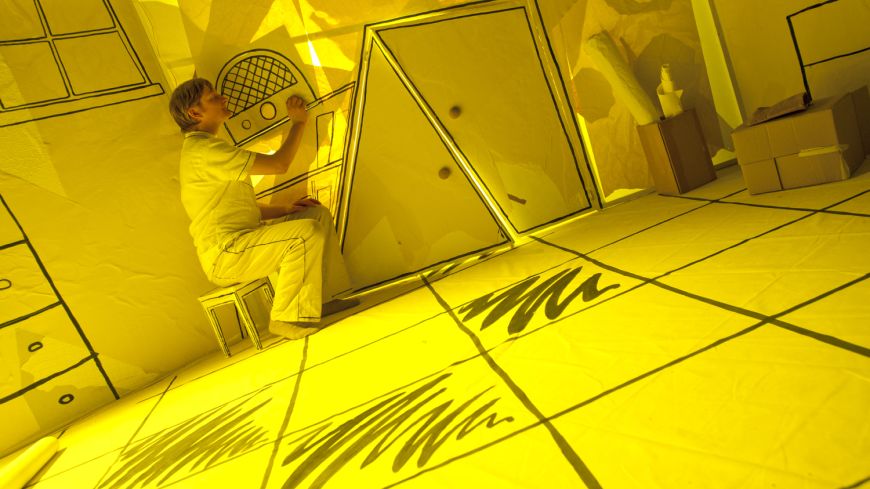 After queuing in the foyer of the Church Hill Theatre with the delights of Loopy Lorna’s tearoom luring in the background, the audience of nursery aged children go on another wee adventure round the corner in the rain to the Church Hill Theatre Studio.  Here we are invited to remove our coats and shoes and enter the incredible world of Paperbelle.

The charming set is a recognisable domestic scene made of paper, all cream and white and cardboard, with strongly drawn black lines defining the objects, reminiscent of Mem Morrison’s amazing wedding show, Ringside, but totally geared to tots.  Even the costumes of Eric (Stanley Pattison) and the musician (Ben Talbot-Dunn) are drawn on their white clothes.  The audience settles on the floor on cushions and wee custom made boxes while music from the electric guitar gently sets the scene.

The story is about the visit of Paperbelle, a tiny paper figure, to the house of the highly energetic and thoroughly engaging Eric.  Not only is Paperbelle elusive as she appears and re-appears in unlikely place all over the room but it is astonishing how she does so.  The entire production is ingenious and full of magic and amazement that induced shrieks of delighted laughter from the young audience who were thoroughly absorbed from the get go.

Gradually primary colours appear one by one and in different forms, from a naughty red bouncing ball to a happy yellow ukulele, all done with deceptive simplicity. As everything turns to colour there are echoes of the award winning show, White, in this very different, rumbustious and interactive performance.

This is a breathtakingly clever and beautifully pitched show for small children.  Their use of light and co-ordination of sounds as well as the comic knockabout skills of Stanley Pattison and unobtrusive gentle guitar strings of Ben Talbot-Dunn makes for a first class piece of children’s theatre that leaves everyone with a smile for the cardboard camera at the end.

Frozen Charlotte Productions have produced informative and cleverly produced souvenir programmes featuring the very Paperbelle, that were handed out to the whole audience at the end.  Lovely touch!