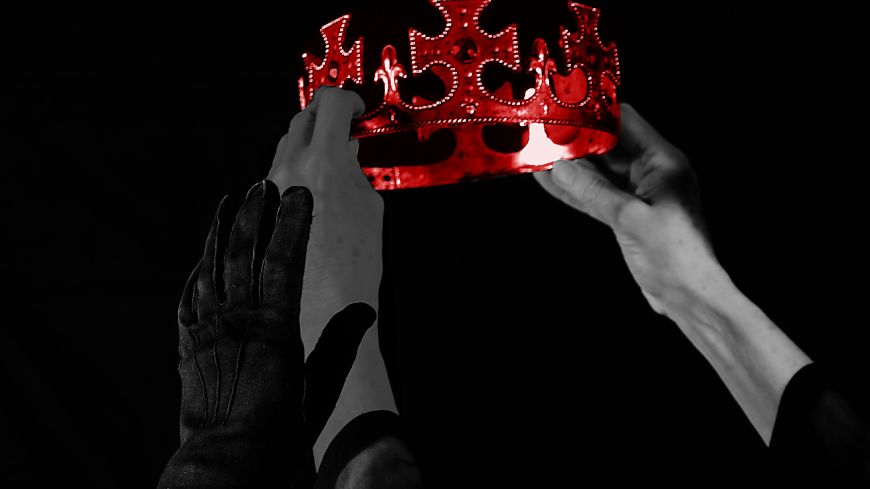 Shakespeare wrote his Scottish play, Macbeth, in English in the early years of the reign of his Scottish King, James VI of Scotland and I of England. The play was translated into Scots by the late Robin Lorimer and was published by Canongate Press in 1992.

In 1995, Edinburgh Theatre Arts successfully presented selected scenes from MacBeth in Scots on the Fringe as a companion piece to their full–scale Fringe production of Shakespeare’s original text.

The story of greed, bloody murder, sorcery and double dealings, where there are crowns on heads but no peace in the hearts of the wearers, is told with an intense honesty by the cast of Edinburgh Theatre Arts.

Danny Farrimond is a commanding presence as MacBeth and Edith Peers as his wife gives a winning performance each delivering the rich Scots text with conviction.

In the simple theatre that is St Ninian’s Hall, the set is a stark black one with haunting sounds and swirling smoke. The stage is furnished with chairs that look like a stunted MacKintosh design, yet that subtly convey the sense of being in a castle. The costumes are simple and effective; they are modern and economical yet manage not to slip badly in to anachronism. A neat trick and top marks to the cast.

The green sashes worn over the black outfits before the murder of Duncan change to red after it, with the costumes of MacBeth and his wife simultaneously becoming more regal and more red as the guilt of their evil deeds seeps in to their being.

The predominantly black set is again subtly but impressively transformed by the lighting effects created by Ian Cunningham. The bathing of the stage in a red light after a murder and the autumn lights to show Birnam Wood were masterly.

The cast enter stage from the rear of the hall giving a twist to the performance that may have been imposed by the space but which works well giving an added immediacy to the piece. The final scene of MacBeth’s death with the stamping staffs of Birnam fading to a heartbeat is inventive theatre. Edinburgh Theatre Arts is steeped in talent and gave an intense, honest and thoroughly natural rendition of the robust translation of English to Scots in this important and timeous world premiere.

In the script’s preface, Lorimer wrote “In this work I have endeavoured to translate Shakespeare’s only Scottish play into a relatively modern Scots capable of sustaining the same levels of style, and achieving the same dramatic effects, as his English verse and prose. In grammar and syntax, I have chiefly… been guided by the models which my father copiously provides in his New Testament in Scots, but the lexis which Shakespeare’s huge vocabulary has required me to adopt is somewhat archaic, and I have employed a good many words and expressions which are no longer current in contemporary … spoken Scots.”

A small glossary is provided in the programme to help the audience tune in to the old Scots but Shakespeare’s English  is itself archaic, requiring study and analysis and  those who admire the English bard have foreknowledge of the story so the theatricality can carry a performance whatever language it is done in. The Scottish play done in Scots just seem logical.

Lorna Dixon, who plays the Seer with the presence of a silent keeper, has also written in the programme on the play’s history and notes that Shakespeare made “no attempt to put Scots words into the mouths of the characters” in spite of his having “no qualms …about mocking Welsh or French speech”. A prudent move, no doubt to keep on the good side of his King who although instrumental in bringing about the dominance of the use of English and the demise of Scots, "probably did occasionally lapse in to Scots”.

In the souvenir programme, director Mike Duffy comments on Shakespeare’s world-wide appeal and how the Edinburgh International Festival hosts versions of his plays in many languages that are celebrated by audiences.

In our current political climate where the eyes of the world are on Scotland to see how they decide their future, it is fitting that Scotland’s other mother tongue, Scots, is recognised at this level. It is after all the language spoken by many people living in Lowland Scotland and that is still alive and loved in the literary world.

This translation feels like a homecoming as the vital language sits as easily and naturally with this Scottish and universal tragedy as it spilled out of the mouths of the actors, in particular Mags McPherson who played the lead witch, Colin McPherson as Ross and a janitor, Stuart Mitchell as  Banquho, John McLinden as MacDuff and David McCallum as Malcolm Canmore.  Each gave strong and impassioned and professional performances.

This production of MacBeth in Scots is Edinburgh Theatre Arts’ contribution to the Royal Shakespeare Company’s Open Stages initiative which encourages theatre companies throughout the UK to stage Shakespeare’s works in new and innovative ways.  The RSC, in association with the National Theatre of Scotland, will select one of the participating Scottish companies to perform in the World Shakespeare Season at Stratford upon Avon this year.

The performance on Friday 4th May 2012 will be a private Gala Night attended by Robin Lorimer’s widow, Priscilla and distinguished guests.