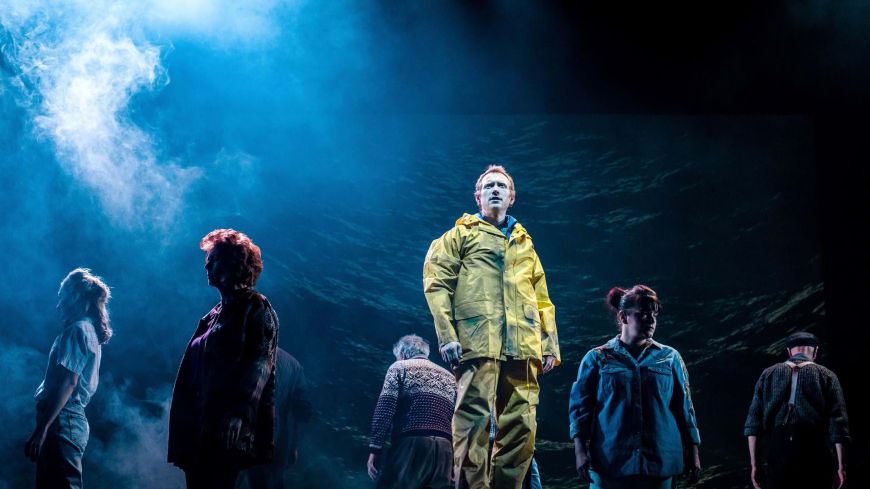 “Fight. Survive.” It’s not an uncommon mantra for fishing communities like the one brought to life with Lost at Sea. Infused with real voices, this tale is bitterly true for the families that make their life with the sea and for the unlucky ones that ultimately sacrifice theirs to it.

Playwright Morna Young once heard on the radio, “When you die, you become the subject of stories.” With minimal set and richly descriptive, truly Scottish narrative, the people onstage are the story; weary, dutiful, steadfast, they are bound together not only by their hardships but by the ocean itself. Based on her endeavours to understand the loss of her father, Daniel “Donnie” Young, to a fishing accident, Young explores the lives of those that took the harsh bet on the boom of the fishing economy, those who are never recovered from the storms and those who carry on.

The characters of this North-East Scottish town act out the life and death of fisherman Jock, the truth of which enquiring daughter Shona has returned to unearth. Melancholic shanties and haunting folk tunes stipple this musical play, with the mates of the ensemble taking up the violin, guitar, mandolin, voice and hand drum to atmospheric beauty. At times a bit hazy to follow due to the shifting timelines, the narrative pivots between echoing poetic passages and anecdotal dialogue, juxtaposing the overarching drama of the behemoth that is the ocean with the colloquial nature of the village community.

In particular, music and story are not uncommon comforts for grieving fishwives and families, evident in other real-life accounts, such as the story of The Fishwives Choir, organised by Jane Dolby who lost her husband Colin to the sea in 2008. Without a body, no death certificate could be granted, and that left her with no income and no security when the creditors came to call.

It’s not lost that the “Mission man, the bearer of bad news” to whom the ensemble refers is the Fishermen’s Mission, the same charity that helped the Dolby family and for whom the proceeds of The Fishwives Choir support. “Her story is yours and yours is hers” Tam Dean Burn, this piece’s veritable Puck, ominously bellows upon Shona and the fishermen, reminding us all that the stories of these communities are all intertwined.

Lost at Sea ends with few questions answered, which is much the same for the families with the same tragedies rippling through their lives.