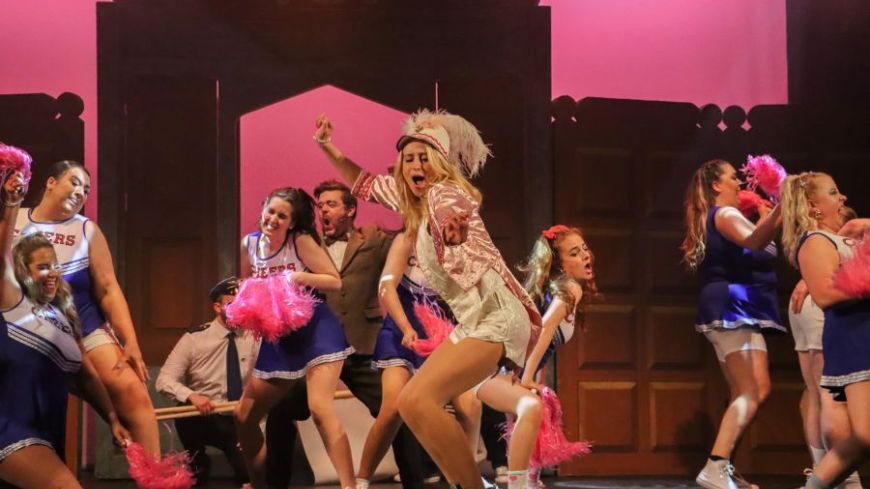 With slick dancing, high energy and a wow factor in charisma that only a strong community can drum up, Legally Blonde is a fun, feminist, feelgood romp through ‘rom com’ excellence.

Based on the hit 2001 film of the same name, this musical comedy sets its gaze on Elle Woods, a popular ‘Delta Nu’ California sorority girl who is on the cusp of having it all: a perfect grade point average in fashion merchandising, a great group of gal pals, a killer wardrobe and a picture perfect fiancé. Her rosy life gets upturned when, instead of proposing, her boyfriend dumps her to pursue a more “serious” life at Harvard Law where he is looking for “less of a Marilyn and more of a Jackie.” With razor sharp determination, Elle charms her way into Harvard Law to win back her man, but undergoes a personal transformation that transcends dreams of wedding bells and sees her emerge, with new friends, mentors and self-won confidence helping her along the way, into a fierce lawyer in her own right.

Our heroine, played by Laura Green, is plucky, sweet and friendly. Well-cast Green opts out of a scrappy, near-ditzy slant on the character made popular by Reese Witherspoon and brings forth a warmth and innocence in her Elle.

Greg McCafferty-Thomson’s Warner, bozo-boyfriend-to-Elle, is satisfyingly sleezy, with the right vocal timbre to pull off the role, while Joe Purcell as mentor-cum-beau Emmett is earnest and so likeable. Jo Heinemeier is especially impressive as Vivienne, considering she only had 8 weeks to step into the role - wow! The whole Allegro cast has the crowd in stitches; not one actor on stage is going through the motions - each has developed their own lovable character, creating scenescapes that bring this world to life from its sorority house to Harvard classrooms.

Formed in 1977, Allegro is an amateur theatre group, and nothing amateur about the heart and talent on this stage, seen the strongest in Rachael Anderson as Paulette, the eccentric salon technician who has a soft spot for the Irish. Anderson is hysterical, lively, compelling and her performance would be as comfortable on the Church Hill Theatre stage as it would be in a West End venue.

The only 'blood in the water' for this production is the sound design, which too often drowned out the lyrics and asides from the stellar cast.

Much like its main character, Legally Blonde is a smart and bubbly musical you shouldn’t underestimate.