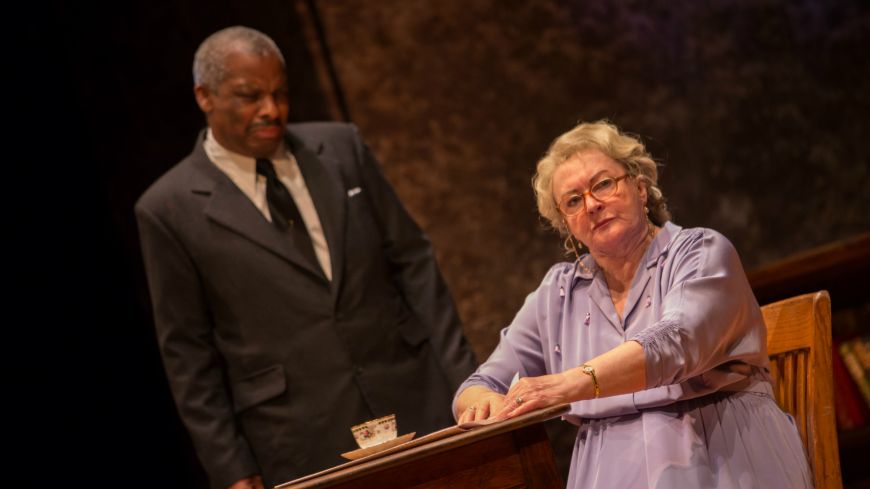 With the likes of Django Unchained and Lincoln dominating our movie theatres and news outlets over the past few months, you would be forgiven for thinking that the issue of racial equality was a topical balloon in grave danger of bursting by its own ambitions.

Whilst it is, of course, a critically important issue and one which the majority share the same objective, too much of anything at once can prove to be counterproductive both in the short and the long term. With this in mind, it initially occurred to me that perhaps it was either poor judgment or unfortunate coincidence that Driving Miss Daisy had found its way to tour the U.K so shortly after the recent media storm. That this could be the breath to burst an already severely bloated balloon.

But then, the story is about so much more than that. Anybody who has seen Alfred Uhry’s quasi-autobiographical play or the Oscar-winning film, will recognise that, ultimately, it is a joyous celebration of friendship and an unashamed, if quietly naive, plea for everyone to just try and get along.

Written in 1987, Uhry’s Pulitzer Prize winning play focuses on the twenty five year long relationship between Daisy, a 72-year-old white Jewish widow, and Hoke, her black Christian driver, in Atlanta, Georgia, from the late 1940’s onwards. What begins as a prickly and reluctant relationship, at least on the part of Daisy, slowly twists and turns into something quite remarkable as they realise that they are more to and of each other than they could ever have imagined.

Everything about this show is sunny. It is warm, bright, optimistic, cheerful and clear in its humanity. It is that summer afternoon glass of wine that makes everything just seem right and perfect. There are clouds lurking in the background, of course. Racism against black people and anti-Semitism whistle in the breeze throughout the show. But what you really see here is a relationship between two aging and intelligent human beings, blossoming into a colourful and beautiful.

The performances are wonderful and soft, especially Don Warrington as the lovable Hoke. His effortless charm and jolly humour pulls us in and makes us all wish we had someone like him in our lives.

If you can get a hold of a ticket I urge you to go and see this wonderful show. Jam packed with charm, wit and humour, if you fail to raise a smile then you can consider yourself clinically dead.