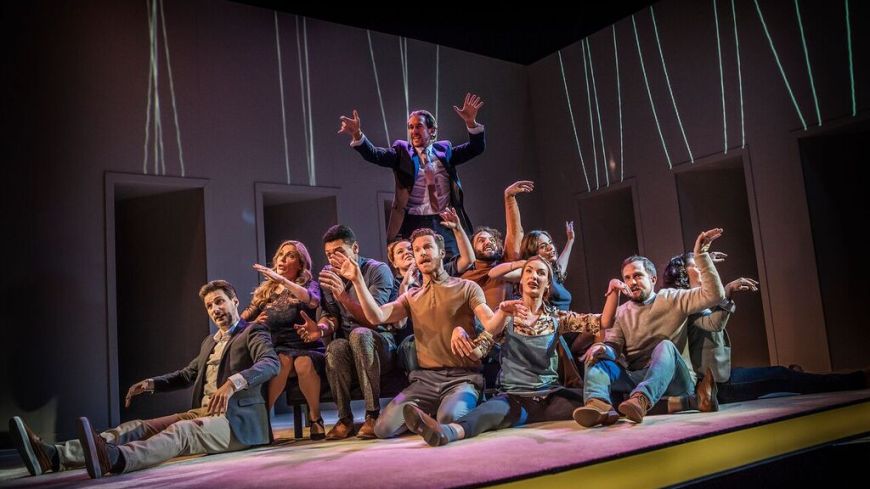 Join West End stars Ashleigh Gray and Oliver Savile for an evening of good company in the understated Aberdeen Arts Centre this week. Aberdeen loon, director Derek Anderson, brings a perfectly fine staging of this Sondheim classic to his home stage, leaving any controversial decisions to Elliott Harper Productions for their upcoming run in London later in the year.

On his 35th birthday, bachelor Bobby (Oliver Savile) is coaxed to blow out his candles and make wish yet he falls short. Surrounded by an eclectic circle of once married, remarried and to be married friends, the circumstance of Bobbie’s own bachelorhood comes under scrutiny. Stumbling through dinner parties, drug induced chatter, first dates and second guesses the pros and cons list of marriage is unpicked.

Retaining the 1970s vibe (minus a careless iPhone appearance) Anderson’s interpretation of this award winning musical holds itself well, allowing the exceptional vocal talents of the cast emit energy throughout the modest 350 seat auditorium, but fails to draw more than a joyful titter from their audience. That is not to say it does not provide an enjoyable experience, but the unexpected is not expected to attend.

Savile’s Bobby is sullen and not quite sarcastic enough, yet comes into his own after a drink or three - or something harder if he can get it. Thriving on the support of his narcotic sharing buddies, his performance strengthens giving him enough of a high to perform the shows finale with a bit more welly.

Aurally spectacular and not a left foot insight, Anderson’s cast stroll through each scene with ease - seeming not to break a sweat even in the marginally more complex moments. Southern belle Susan, as played by Lisa-Ann Wood (a former West End Cosette), subtly dominates every scene, drawing the eye even in larger ensemble numbers.

Unsurprisingly, at the forefront of the brilliant performances Wicked’s Ashleigh Gray is exceptional as tepid toed, bride-to-be Amy, offering a hilarious cocktail of emotions in “Getting Married Today”, leaving you thirsty for more from her.

An evening at Company is like dinner with an old friend - familiar, enjoyable but full of the same nostalgic stories. Luckily this cast are blessed with voices you could ever tire of hearing.