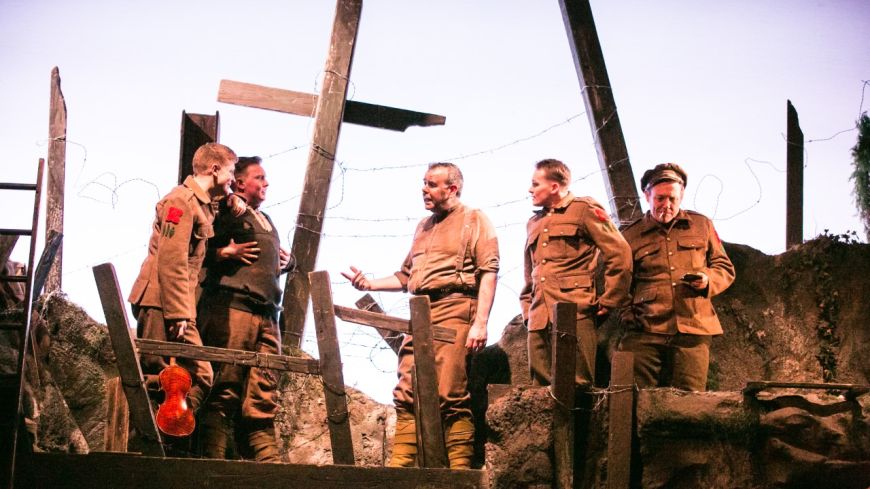 One hundred years on from the Great War we find ourselves in another age of political uncertainty. Although society has evolved over the past century, reminders of that harrowing time are welcome history in our theatres - if not only to entertain but to ensure that “Never Again” will we see these abdominal atrocities. Rachel Wagstaff’s adaption of Birdsong has received a structural shake and returns for a timely tour of our great nation.

Abandoning the 1970s elements of Faulk’s 1993 novel, Wagstaff hones the multi-generational plot neatly to the intertwining lives of Jack Firebrace and Stephen Wraysford. One, a ‘sewer-rat’ far from home and missing his boy, and the other a man caught up in the foils of war yearning for his sweetheart. Despite billed at the forefront of the plot the realities of Firebrace’s plight steal more than just the limelight from the cover couple.

Joining Jack in the ranks of the ‘sewer-rats’ as they tunnel their way below No Man’s Land, fighting their own underground war with explosives, offers a hardy dissuasion of any repetition and an honest look into the not-so-great moments of our country's history. Tim Treloar’s Firebrace battles paternal angst and imminent danger with a troubling truth, yet is loveable and a friend from the off. As a representation of the men we remember, his friendship with ‘mole’ mate Arthur Shaw (Lloyd Shaw) highlights the sheer comradery that led men over the top - on in this case, under it.

Stephen Wraysford’s (Tom Kay) affair with the beautiful Isabelle Astaire (Madeleine Knight) breaks up the tension of the war with a trauma of its own. In brief moments of passion and jollity we see Kay and Knight ignite with passion and conviction for an otherwise cool attraction. As the plot progresses we begin to see their relationship, and their performances, warm up before the plot sadly rips them apart again.

Depicted on Victoria Spearing’s stark, trench backdrop Alex Wardle’s subtle yet invaluable lighting design shifts between the two timelines and vastly different spaces. Silhouettes of soldiers facing their fate litter the piece and affix themselves to the mind.

Not alone in its grand, 100th anniversary, national tour, Birdsong may not stand up to the feat that is National Theatre’s WarHorse, yet it reminds us of the history that has been written before us and how we can write a different story next time - lest we forget.

Running until Saturday 12th May
Tickets at Captitaltheatres.com