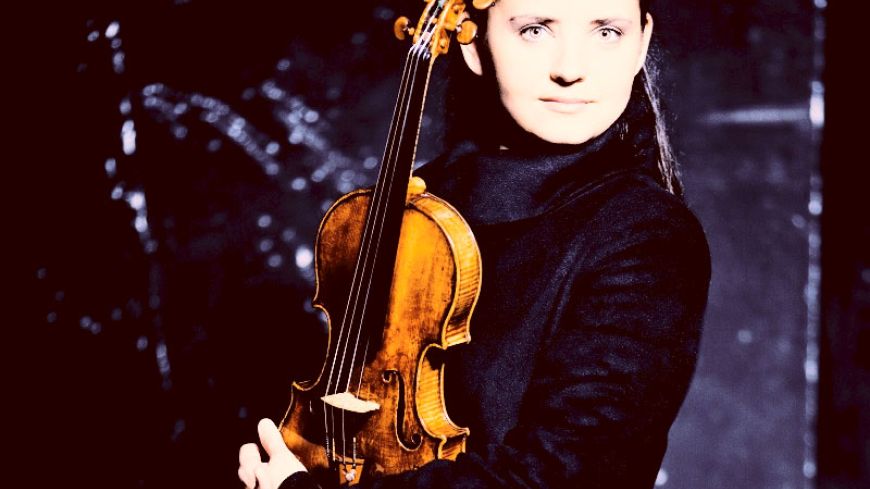 A seven minute film score opened the concert. Bernard Herrmann's career was in the film industry and he gained his fame for writing music which enhanced the visual action. We heard the Love Scene which accompanied Alfred Hitchcock's psychological thriller Vertigo of 1958. As a stand-alone work we heard how Herrmann dealt with obsession, the music going round and round the same topic.

Baiba Skride was the soloist for Korngold's Violin Concerto in D major. In the pre-concert talk, viola player Lisa Rourke knew just how to get Baiba Skride telling us about the Violin Concerto but also about her own background in a family of musicians.Throughout the 1930s Korngold was writing film scores and we heard that he would only go back to music for concert performances once the Hitler regime was over. The Violin Concerto was first performed in 1947 with Jascha Heifetz as the soloist. Throughout its three movements the soloist was very much on her own with, as the programme notes describes it, relentless virtuosity. Baiba Skride gave us a delightfully jaunty performance. Not surprising that when she spoke of some of her future engagements they were with some other very fine orchestras round the world.

Unless a guest conductor decides to address the audience we see little of his or her face. This was the case with John Storgårds who was admirably diffident in accepting our applause. He came to conducting from being the leader of the Swedish Radio Symphony Orchestra. When a conductor has been a violin player this can cause trouble for a soloist. But fortunately John Storgårds and Baiba Skride clearly thrive on one another's musicianship.

After the interval the conductor was clearly very much in charge for Tchaikovsky's Fifth Symphony. It was lively, bright and enthusiastic under his baton. If the two film scores earlier had been more thought provoking than enjoyable, the Tchaikovsky lifted the spirits.