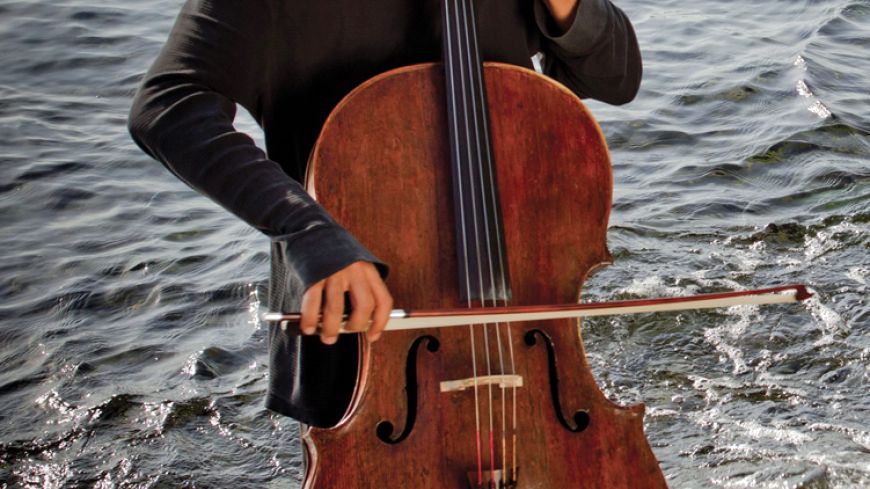 It was a rare sight, and exciting, to see two top cello players perform the solo parts in a work by the older of the two. With the strings of the Orchestra behind them their Principal Cello, Aleksei Kiseliov, was joined by Giovanni Sollima for the first performance in Scotland of his Violoncelles, vibres!. We watched them playing together and against one another in a thrilling exposition of all that is good about the cello. Meanwhile the strings gave us the background music, with the composer conducting them at moments when free of his cello.

Whilst every pre-concert talk is good, some are memorable. Aleksei Kiseliov introduced us to Giovanni Sollima. Had it not been for the discipline of Aleksei's written down question reminders, Giovanni might still be talking to us. It was a fascinating insight to the life a young man who found his first cello at the age of about nine under the Christmas tree and immediately demanded his father provide him with lessons. He was already a piano player. Nowadays, as well as a composer his cello playing is widespread through classical, jazz and rock.

With the stage rearranged for just one cello soloist and the rest of the Orchestra in place, Giovanni Sollima showed us his version of Dvořák's Cello Concerto. And with aplomb. His cello was made in 1679 by Ruggeri, whose workshop was in the same street as Stradivarius's in Cremona, he had told us. The applause was followed an encore of contemporary music.

The Fifth Symphony of Shostakovich has a political background for it was first performed in Stalin's Russia in 1937. The composer had fallen foul of Stalin with an earlier opera and feared the dreaded knock at his door. However, the Fifth Symphony seemed to indicate that he was back on track, although some think there's more to it. In a sophisticated question earlier, Aleksei was asking if Giovanni planned any trips to President-elect Trump's USA over the next four years - by way of indicating the close proximity of music and politics over the years. The four contrasting movements under the baton of conductor Thomas Søndergård were vigorous in their difference and inspiring. Memorable was the cello and double bass start to the second movement and the very quiet beginning to the third. Principal flute, oboe, clarinet and violin players were in top form.