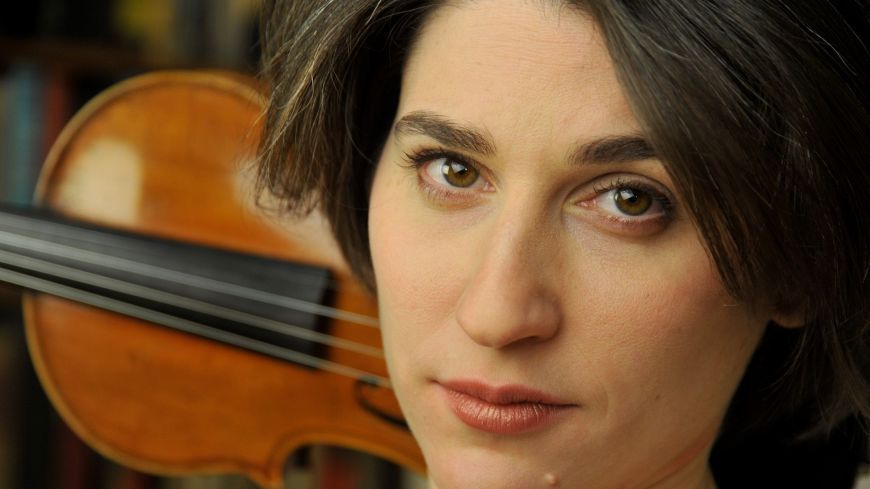 The expectation was for a concert of Beethoven and Mozart; an overture, a concerto and a symphony. And that's what we got. But presented in a very different way from normal at the Usher Hall. The players arrived on stage together with the violins and violas remaining standing to perform the short Coriolan Overture - a short full bloodied work written to accompany a rewriting of Shakespeare's tragedy Coriolanus, full of powerful tension until the main character's death ends the work with three pizzicato notes.

Whilst the stage was being prepared for the Mozart concerto with flute and harp solo, Sharon Roffman the Leader of the Orchestra bounced on to centre stage to tell us what was going on. When some weeks ago the planned conductor cried off, she and her colleagues decided they needed no replacement - and would do it their way, taking their lead from Sharon at the front desk of the first violins. Sharon had much to tell us but was cut short when her colleagues came back on stage for Mozart's Flute and Harp Concerto. For this they were all sitting.

Earlier in the Upper Circle Bar at the pre-concert talk, relative new comer Peter Dykes, the Associate Principal Oboe player, had been in a livelier than usual and fascinating discussion with the longest serving of the Orchestra's principals, Katherine Bryan, Principal Flute. We learned that Mozart was no fan of the flute but it took a commission from a wealthy flute player with a daughter who played the harp for Mozart to compose his only work for this combination of instrument. Katherine's cellist husband was spotted at the back listening to the talk. Katherine told us that she and harp player Pippa Tunnell were friends and were clearly going to enjoy every moment of performing which, when the time came, added to the enjoyment of the Concerto. I spotted the eight fun notes Katherine had added to her cadenza towards the end of the second movement. The audience was delighted to hear the short flute and harp encore.

After the interval the violin and viola players were again on their feet for Beethoven's Fifth. Sharon Roffman had earlier found it hard to find any member of the audience who had not heard Bethoven's Fifth before. But it's a work that allows considerable creativity and, under Sharon's leadership, we heard the Orchestra's sharp crisp interpretation. The rotary trumpets and three different trombones together with Paul Philbert's smaller timpani added to the occasion. At the end the players seemed to go off stage rather faster than we would have expected. But to everybody's surprise they all came back on stage in a long row, sometimes two deep, as do actors at the end of a play.

Self indulgence was at the fore of the concert. As a one-off unexpected treat I think most of the audience appreciated their evening in the Usher Hall. This reviewer certainly did.