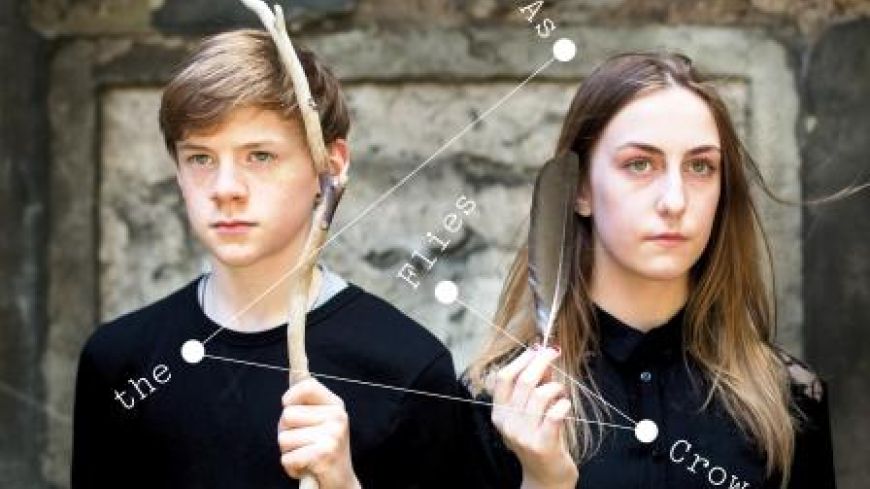 As the Crow Flies, created by award-winning artist Greg Sinclair, imaginatively brings together music, performance and 21st Century high-tech know-how, while managing to maintain its promise of keeping the ideas and unique interpretations of children and young people at its heart.

Supported by Time to Shine, Scotland’s youth arts strategy for those aged 0-25, this production marks the climax of Imaginate’s ‘livescore’ programme - a year-long digital arts project that connects young folk from Edinburgh, Glasgow, Dunoon, the Isle of Coll and Ghent (Belgium). Exploring the different responses of young people, of different ages in different locations, to pieces of music, or graphic scores featuring drawings and other images, or instruction scores written in text, the result is a fresh and lyrical celebration of connection and difference.

With intermittent tinklings of birdsong and wind-chimes and a space that is strewn about with piles of sticks, scattered flowers, hanging baskets and pot plants, there is a distinctly pastoral feeling in the air - despite the incongruous presence of TV screens and cameras. A cello gently resting on its side and several collections of gleaming jars and bottles, hint at the mix of traditional and unorthodox music-making that is to come.

Seven performers, five in Dunoon and two in Ghent, livestream into the show, responding to instructions, or providing such to Greg, who stands alone in his indoor-outdoor garden. They may hold up text requesting him to ‘fly’, ‘run’ or ‘skip’. He plays his cello accordingly. The ‘flying’ and other music is played back via a looper and the performers, all aged between nine and17, give a joyful interpretation through movement with the audacious mix of abandonment and wry humour that only the young can truly carry off.

There are moments of collective music-making using twigs and bottles, and many of the youngsters who have been involved in the workshops across Scotland get their time to shine, joining us through their pre-recorded videos that are projected onto the huge screen that serves as a backdrop. The whole performance is also livestreamed to the livescore project website, so those who can’t make it to Edinburgh this evening are nonetheless connected.

Greg Sinclair is a quietly unassuming performer, who nudges not forces and co-ordinates but does not control this hour of, mostly spontaneous, creative activity. It’s a bang-up-to-date, sincerely inclusive production for people of all ages and all abilities, from any location. And this is how vital connections are made.