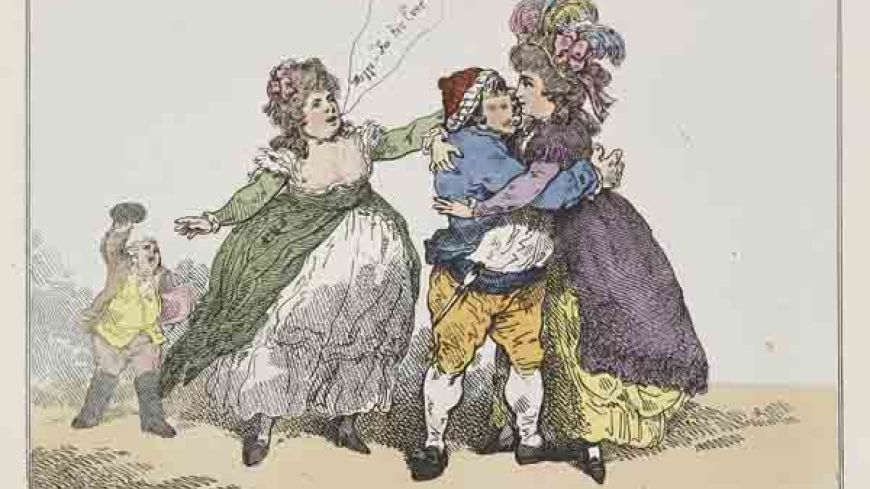 This new unique exhibition opened at The Queens Gallery Palace of Holyrood last weekend (runs til 2 March 2014) it is a selection from the Royal Collection curated by Kate Heard. One hundred prints have been selected from the collection of one thousand, many on a theme basis. It is extremely unusual to go to an historical exhibition and to get the feeling that the drawings and cartoons could have been executed today. The colours and in many ways the political subjects are as fresh today as they were when they were drawn and printed in 18th and early 19th century. Character-wise Rowlandson was the Spitting Image of his day, probably the finest political caricaturist of his era.

Rowlandson made his name poking fun at politicians, foreign enemies and even members of the royal family. Despite this, it was the young George, Prince of Wales (1762–1830), later George IV, who began the collection of around 1,000 caricature prints by Rowlandson in the Royal Collection today. Around 100 works by Rowlandson are on display in High Spirits: The Comic Art of Thomas Rowlandson at The Queen’s Gallery, Palace of Holyroodhouse in November. The exhibition explores Rowlandson's life and art, and the perhaps surprising popularity of his work with George IV, and with Queen Victoria and Prince Albert.

The absurdities of fashion, the perils of love, political machinations and royal intrigue were the daily subject-matter of Thomas Rowlandson (1757–1827), one of the wittiest and most popular caricaturists of Georgian Britain. Blunt, sometimes bawdy and often irreverent, his work offers a new perspective on an era best known through the novels of Jane Austen. Along with his contemporaries, James Gillray, James Sayers and the Cruikshank family, Rowlandson shaped the visual comedy of the period, and his colourful prints and drawings are as amusing today as when they were first produced some 200 years ago.

Thomas Rowlandson studied at the Royal Academy Schools, sponsored by a wealthy aunt. A keen draughtsman, he developed a talent for portraiture and an ability to capture likeness in a couple of strokes of the pen. This skill was combined with a lively sense of humour and an eye for the absurd, and he soon found work designing and making comical prints for London publishers. In a life that would itself make an appropriate subject for satire, Rowlandson gambled and drank away his inheritance, staving off poverty through hard work and an enviable talent.

Satirical printmaking was a venerable tradition in Georgian Britain, where freedom of the press had long been exploited by artists. Satirical prints were collected by the fashionable elite and pasted into albums, on to walls and decorative screens, and laughed over at dinner parties and in coffee houses. George IV shared the taste for collecting prints, even though the royal family often found themselves the subject of the joke, and in extreme cases the butt of attacks on their lifestyle and affairs. Conversely, while George IV was collecting caricatures, he was also attempting to suppress and censor prints that showed him in a bad light, caught in a never-ending game of cat-and-mouse with inventive and mischievous printmakers.

Few of the leading political personalities of the day escaped Rowlandson's scrutiny. The artist turned his pen on Napoleon, the licentious politician Charles James Fox and the ambitious William Pitt the Younger. In The Two Kings of Terror, Napoleon and Death sit face to face on the battlefield after Napoleon's defeat at Leipzig in 1813. London high society too was the focus of many of Rowlandson’s caricatures. The glamorous and scandalous Georgiana, Duchess of Devonshire, who it was claimed had traded kisses for votes in the cut-throat Westminster election of 1784, is shown kissing a butcher in The Devonshire, or Most Approved Method of Securing Votes.

Other highlights of the exhibition include Dr Convex and Lady Concave, which pokes fun at two very different characters; Money Lenders, thought to be the earliest satire on the Prince of Wales's increasingly large debts; and Sketches at - an Oratorio!, showing Rowlandson's talent for capturing human faces and expressions. In A York Address to the Whale. Caught lately off Gravesend, the Duke of York thanks a 23 metre-long whale for distracting attention from accusations that his mistress was paid by army officers for securing their promotions from the Duke, as well as her threats to publish their love letters.

Rowlandson produced a number of highly finished watercolours, and two of his largest and most important works in this medium will be on display. The exhibition also includes a number of the artist's landscapes, which, although never intended as satire, are infused with the humour that permeates all of Rowlandson's work.

The exhibition runs from end of November to the beginning of March and will be open over the Christmas and Hogmanay period but do check with the website for the correct opening times.

High Spirits: The Comic Art of Thomas Rowlandson is at The Queen’s Gallery, Palace of Holyroodhouse, 22 November 2013 – 2 March 2014.