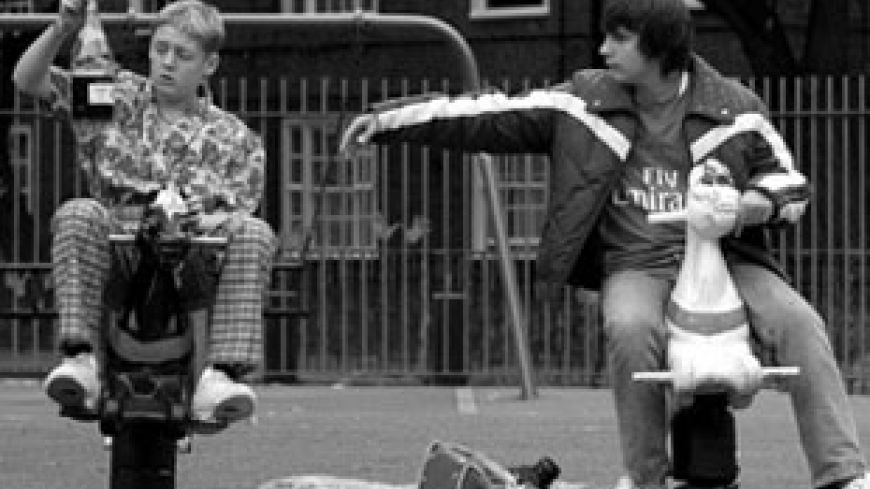 I have never seen a Shane Meadows film. “Not even This Is England?” I hear you cry! Yes, not even This Is England. It was never a conscious choice to not watch his films. It was merely a case of, I had read a lot and they all seemed so dark. It’s possibly the eternal optimist inside that screams: “Life isn’t that bad!” Anyway, my Meadows cherry was popped at the screening of Somers Town at the Edinburgh Film Festival. And I was pleasantly surprised.

Shot predominately in black and white, apart from the closing sequence, Somers Town tells the story of a young boy named Tomo and his friendship with a Polish boy named Marek. Tomo is a runaway from the Midlands, and on his arrival in London he has a run-in with some local youths he leave him a bit worse for wear. Marek lives with his father next to St Pancreas station and his father, Mariusz, is a new employee on the building site for the new Channel Tunnel rail link. After Tomo’s fight, the two boys meet at a café and bond over Marek’s love for a girl who works there named Maria.

The film tackles various themes, but the most engaging to watch is the growing friendship between the two polar opposite boys. Tomo (Thomas Turgoose, who played Shaun in This Is England) believes himself to be a tough guy, whereas Marek (Piotr Jagiello) is more sensitive. The chemistry that the two have together lights up the screen, so much so that even though the film is in black and white, the colour that would have been still shines through. Both of the boys are fifteen in real life, just like their on-screen counterparts. After the object of their affection leaves, the boys party a bit too hard, in a scene where Meadows simply told them to ‘have fun’ and let the cameras role. The result is one of the most enjoyable sequences since Abigail Breslin danced in Little Miss Sunshine.

The rest of the cast are enjoyable to watch too. Perry Benson (This Is England) plays a dodgy dealer who pays the boys to work for him provides comic relief. Even though he does conform to certain stereotypes. As Marek’s father Mariusz, Ireneousz Czop gives an honest portrayal of a man trying to make a better life for him and his son. Acting as a good foil to Tomo’s lack of morals.

Ultimately this is a story of how friendship can grow in the strangest circumstances, and Meadows has a wonderful way of making it work. Meadows collaborator Paul Frazer delievers a script that not only makes you laugh, but also manages to pull on the old heart strings, especially as colour is injected into the boys lives at the end.

Being my first taste of Shane Meadows, I am now desperate to see what else he has to offer. If it’s as good as this, then I’m sure that I won’t be disappointed.