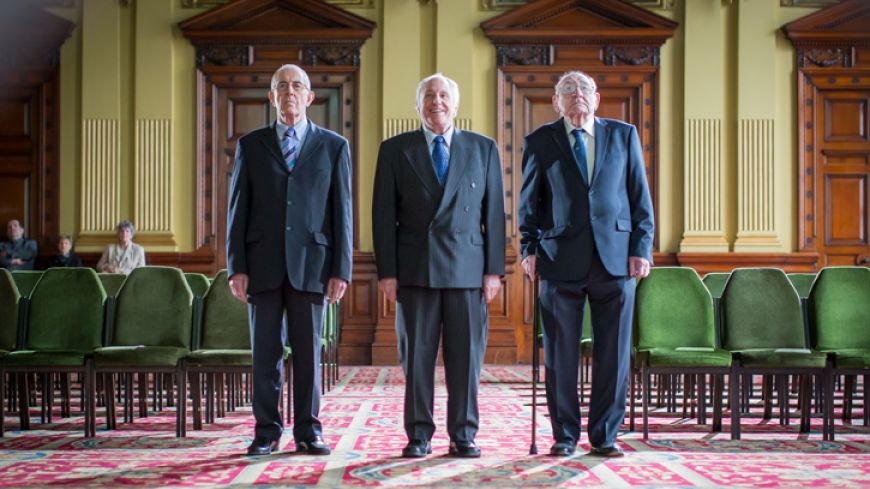 Having attended or been involved in some small way with 33 years worth of the Edinburgh International Film Festival, it is with some regret I'd never made the short hop, skip and jump over to Glasgow to see a single event at that great city's film festival, running since 2005.

I managed to briefly catch up with Allan Hunter, the festivals co-director for a few minutes after this year's closing gala. I half-jokingly apologised for never having made it over there till now. He laughed and said 'well you picked a great film to start with'.

And a great film it is. All it took for me to decide to see it was a few sentences describing it and I thought – this is an important story about a little known event in Scotland's recent history that has implications for and parallels with current world events. It needs to be seen. My instincts were justified as I happily watched an audience wipe away tears as they gave the film a rousing standing ovation.

In 1974 four engineers at the Rolls-Royce factory in East Kilbride refused to repair the engines of four Hawker Hunter military jets bound for Chile. They were intended to support General Pinochet's murderous military regime. Bob Fulton, Stuart Barrie, Robert Sommerville and John Keenan started what became a 4 year boycott on repairing the engines by 'blacking' them which meant they couldn't be touched by any worker in the factory.

Risking their careers but backed by their trade union, a Labour MP and a growing solidarity movement with Chilean refugees, their simple act of conscience and defiance had consequences the four men knew little about until film maker Felipe Bustos Sierra investigated beyond what was already known.

Cutting between interviews filmed both in Scotland and Chile, (sometimes with opposing points of view), the film expertly intertwines archive footage (some of it upsetting but necessary) and news reports from both countries along with informative graphics to weave an extraordinary tale of the unintended consequences an act of doing absolutely nothing had.

I could wax lyrical about individual moments and what you will find out but I don't want to give too much away for although this is a fascinating and informative documentary, it's delivered with a cinematic and dramatic sense of suspense, with an un-self conscious linear narrative, where we're constantly wondering 'well what happened next?' I'm happy to report it more than delivers both a satisfying conclusion and an emotionally rousing finale.

The finished result is an important story and a beautifully made and touching film. I sincerely hope that an imaginative distribution company with a bit of clout and reach will see this film's potential because whilst people are jaded by the daily grind of grim reality, they are not jaded by events that have positive life affirming twists.

Expanded from his short documentary film of the same name and subject this has been a labour of love and many years for Scottish based Chilean / Belgian national Felipe. A modest Kickstarter fundraiser to help complete the project reached its target, but the finished result has impressive production values that belie humble origins.

I can only surmise that everyone involved felt this was too important to go unnoticed. Nae Pasaran reminded me, just very slightly of Michael Moore's Fahrenheit 9/11 and not just because historical events took place on the same date in different years.

I was reminded of it in terms of its context, its occasional humour to balance the horror and its style and whatever you think of that film, people were hungry to see it around the world, so disenchanted with the hidden truths of corrupt amoral regimes that most of us feel powerless to challenge. Nae Pasaran reminds us that simply isn't true and that little stones can send out large ripples.

Nae Pasaran will be screened at the East Kilbride Village Theatre on Sunday 11th March 6.30pm and in Edinburgh at the Filmhouse on 28th April.