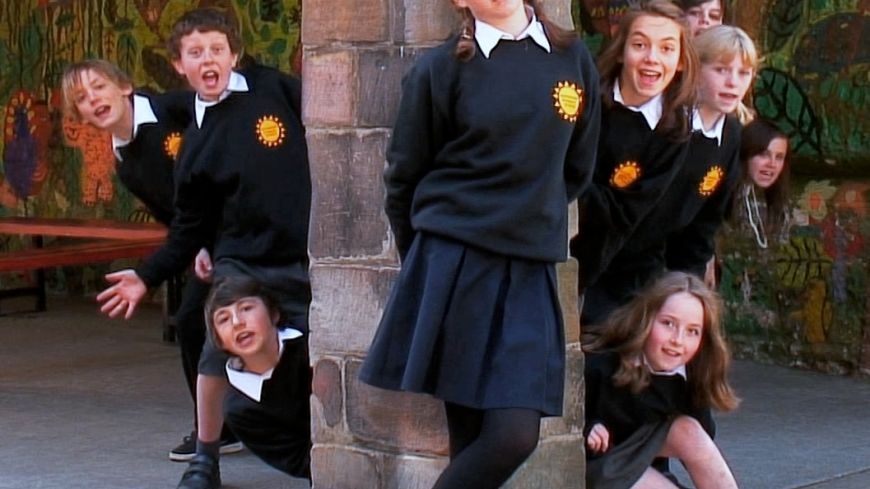 The brainchild of Edinburgh director Angus Reid, Primary School Musical is the by-product of a school stage musical, itself inspired by a threat of closure to his own kids school and local swimming pool. Its creation may have been semi-political in nature but it delivers over an hour’s worth of shameless fun and high energy hijinks by its youthful cast.

Primary School Musical is still looking for a distributor at the time of writing, but low-budget to no-budget independent films don’t come much more ambitious than this. An all-singing, all-dancing feature length community project, its meagre funding belies some impressive production values.

It’s a cross between a technically polished gem and a bit of daft fun, sometimes rough around the edges but all the fresher for it.

And it doesn’t waste time in getting going. The school bell rings and a phalanx of Sunnyside’s pupils come marching into choreographed view, singing in unison about their day.

Soon we meet chief protagonist ‘Kran’, waxing lyrical about having to move schools. He just wants everything to stay as it is. Passing his local video store he spots the poster for High School Musical. Clearly things are sliding since that film is ‘girly mush’, unlike the gory zombie films of the good old days.

But Kran has an epiphany exclaiming ‘as I behold this abomination – it happens – genius strikes the chosen one!’ Yes, the only way to solve the school’s problems is to stage a musical. An anti-musical!

And so begins a lot of joyful silliness strung around how to put a musical on to save the school. Naturally, a dozen song and dance routines are the order of the day as the pupils try to resolve this conundrum. And as can only happen in the post-modern retro irony of this genre, the entire cast are blissfully unaware they’re already doing it.

Tongue-in-cheek nonsense blends nicely with more serious issues - being late for school, absent fathers, making friends, being a loner, bullying, trouble at home and of course what boys and girls actually think of each other. The boys agree ‘girls are evil.’ The girls think ‘boys aren’t evil, they’re just backstabbers’.

Most of the dialogue and song lyrics are along these lines – straight up and witty.

‘We find our hero tossing and turning on a sea of troubles……’ comments 'Wurzle' only to be interrupted with ‘SHUT UP! I don’t want any narration!’ And as one pupil laces up his boots he’s asked ‘How come you’re always early for football and late for school?’ He replies ‘It’s a miracle - it’s beyond understanding.’

And football proves to be a highlight. The nice Sunnyside kids take on the scary Skullkids and are thrashed by a mere 400 goals to nil. They lose because they allow a girl on the team and spend half the game rocking out on the pitch with drumkit and guitars as goal after goal is scored behind them.

It’s a fun sequence that works because it blends the choreographed with chaotic improv and for a moment reminded me of the splendid silliness of A Hard Days Night. And since I mention The Beatles, one scene of singing and choreography that really impressed was a quartet of young lads performing a routine with broomsticks. For a few minutes you can see this particular Fab Four are really in sync with each other as their inner wannabe rockstar alter egos manifest.

Eventually inspired by ‘Gran’ (Dolina Maclennan) who tells the kids ‘take to the streets and cause a disturbance!’, the P7’s storm the City Chambers to take on evil mastermind Councillor Grimey - an entertaining turn from Andy Laidlaw playing it part irritated bureaucrat and part James Bond villain.

Helped by a some decent technical flourishes and a good sound mix this is cheerful innocent escapism with winks and nods to the more grown up affairs of Grease, My Fair Lady and the anti-establishment Hair which is partly how director Reid wants it. At the premiere last month the kids on screen weren’t just stirring up a mini revolution but the very act of seeing it on a large multiplex screen was an ‘act of subversion in itself’ the director would like to see repeated across the land.

With hundreds of kids applauding at the end (and hi-fiving Dolina Maclennan aka Gran one after another as they filed out the cinema) one can see there’s a ready-made market for quality community and independent projects like this. Time will tell if this film and more like it will see the back of more projector bulbs. Finger’s crossed.