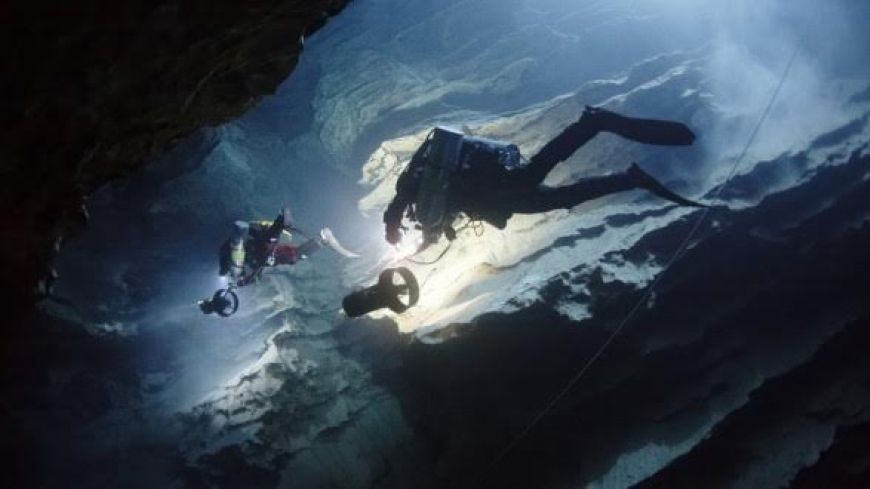 The Finns are on a roll, after Cheer Up and War and Peace of Mind, here's yet another great documentary about an extraordinary series of events that unfolded two years ago underneath the frozen Norwegian landscape.

In 2014 a group of Finnish cave divers went to explore the Plurdalen Valley underwater cave system in central Norway. What should have been a routine and pleasurable experience suddenly turned to disaster when two of the divers (both named Jari) became stuck 140 metres below the surface and drowned.

Incredibly there is some (tactfully edited I suspect) footage pertaining to this event. I was struck by the seemingly casual, calm suddenness and speed in which it all happens. Indeed, had I not, as a viewer, been informed of what was happening I wouldn't have known anything untoward was even occurring.

The relevant authorities are called by the drowned men's shell-shocked companions who make it back to the surface and the events become a major media story across Scandanavia. British and Norwegian rescue teams are summoned but fail to recover the bodies and the police seal off the cave stating its too dangerous to navigate.

And that's where the story could have ended, both for the families and friends of the lost men and for the film maker Juan Reina who just happened to be making a documentary about underwater cave diving with these characters. But the surviving divers were unhappy with the decision to close the cave and decide that they have to honour the memory of their friends and return the bodies to their families. And so they embark upon a covert, illegal and dangerous rescue mission - all of which is filmed including the meetings to plan the operation.

This is where the film unwittingly becomes part thriller (I could hear my own heart thumping as I slowly coiled into a ball during some tense claustrophobic moments) and partly a study of how grown men deal stoically with grief and a little gallows humour whilst getting on with the job as safely and as quickly as possible. They discuss and plan the most practical and sensitive ways to interact with their dead colleagues, discuss how decomposed they might be, worry about how they will feel when they see them and indeed for one of the men whether he can deal with any of it at all.

It's a mixture of documentary observation, talking heads interviews and helpful graphics that explain to the viewer the layout of the cave in relation to the surface and where the divers and their dead colleagues are in relation to each other. But above all it's the extraordinary underwater footage that arrests the viewer's senses both visually and emotionally.

There are some moments where the divers look like they are floating not underwater but in space, where up and down, left and right are meaningless. Other times are nerve wracking as things go wrong during the rescue and there's a camera on everyone's head to capture it all.

If anything this is a very unusual set of events that just happened to be caught on camera as it unfolded, and just for that it's a fairly unique documentary. But as gripping and as haunting as some of it is, it's equally inspiring to see a bunch of friends stick two fingers up to the authorities to do what's right by their friends and by their own conscience.