Film of the Week: Limitless 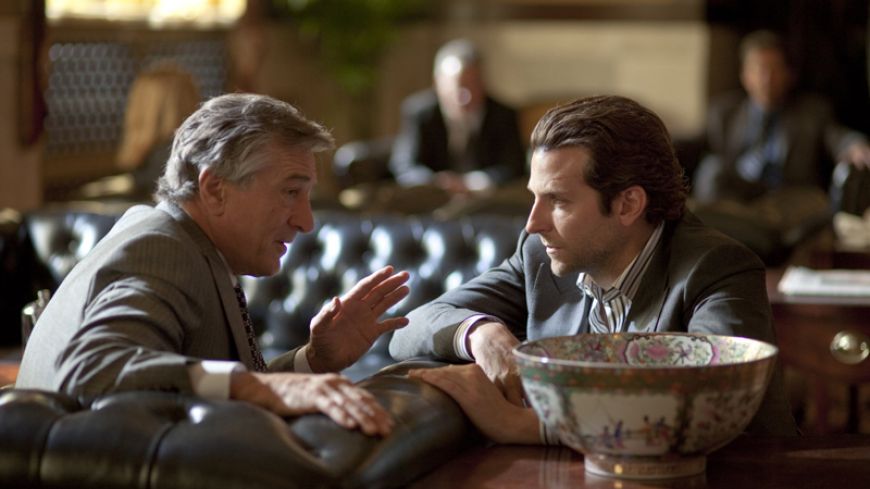 This is a cracking piece of enjoyably daft, Hollywood fluff posing as high concept intellectual guff but ultimately serving up a flashy thriller in the end.

Bradley Cooper, fresh faced from his comedown in The Hangover, gives a star-making turn as Eddie Morra, again suffering not just from one massive downer but a whole series of them after discovering the euphoric mind-bending revelations of a brain boosting pill. Just swallow and within half a minute you’ve turned from average lazy bum into an enlightened highly motivated self-serving genius.

At the outset Morra's a struggling writer with a first time book contract. Creatively blocked, he manages to type not one single word after months of scruffily pottering about his messy flat. ‘Luckily’ he bumps into a shady upmarket dealer he vaguely knows and reluctantly accepts a free sample of a newly engineered drug. Within moments he experiences a high that allows him to access all of his grey matter and repackage it into a high speed cocktail of invention, creativity and action.

Within a minute of ingesting his first pill he encounters his landlady hell-bent on confronting him over late rent. Within moments he’s literally charmed the pants off her and helped her write a thesis for her degree. It’s a witty; tongue-in-cheek start to events but the stakes of turning oneself into a precocious smart arse naturally becomes less pleasant and more extreme as the consequences of regular usage takes its toll.

So he scrubs up, tidies his flat and finally writes that hit novel. But the ‘new me’ effect quickly wears off so he needs a fresh dose of the stuff. After a series of cliched twists and turns, he unintentionally acquires a large stash and sets about transforming himself into a super confident snappily dressed go-getter, playing the stock market to profitable effect.

But his infectious new personality and sudden success has been noticed. It’s been noticed by gangsters, noticed by corporate high flyers and noticed by a strange man who’s just always after him. Even at the end of the film I said to myself ‘who the hell was that guy?’ Clearly I needed to take one of these fictional pills myself whilst watching.

And so it all turns into a fairly predictable but highly engaging ‘where’s your stash of drugs?’ action thriller as one set of characters and events pit against another. But it’s done with a high degree of style with arresting visuals depicting the mind-bending effects of the drug, particularly the unpleasant comedowns with time distortions and multiple personalities wandering about.

It also has a great soundscape and a thumping good soundtrack. And there's a couple of impressive set pieces, one in particular that shows him experiencing a day long memory blackout using an innovative visual gimmick, a kind of fractal telephoto zoom technique that transports the audience through the cityscape in seconds.

There’s even a good turn by Robert De Niro. Playing the no nonsense, intimidating head of a corporate financial giant, he gives us a heartening glimpse of the really great actor he once was before years of dubious comedies and run-of- the-mill thrillers consumed him. Here he steals all of his scenes and gets to deliver a great monologue in which he berates Morra for inheriting his genius rather than earning it.

Limitless limits itself with an intrusive and unnecessary voiceover and the plot becomes convoluted occasionally but in general there’s plenty to enjoy along the way. It's a fun rollercoaster with memorable highs and lows, looping the loop camerawork and exciting twists and turns but its euphoric rushes are, like all fairground rides, insubstantial but enjoyable entertainment.