Film of the Week: In Time 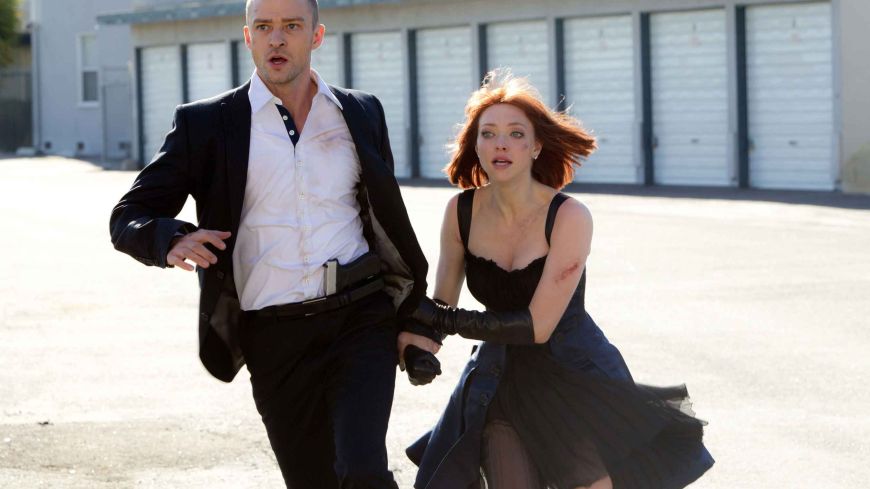 If you’re running late to catch this wannabe blockbuster just slow down. Yes take some of your own precious valuable time and walk. Amble at a gentle pace to your chosen venue and join the slowest moving ticket queue. Then take some more time buying lots of popcorn, ice cream and drinks for you're going to need something to sustain you over the next hour and half or should I say the next hour, since you’ve now missed the first thirty minutes.

Not to worry, absolutely nothing happened in the first act and if it did I missed it as I went into a self-induced paralysis and hypnotic trance, my gaze fixed on an imaginary far off paradise beyond the screen. Not much happens in the next half hour either so if you need to file your nails or refill the popcorn bucket for another noisy scrummage just go for it, other audience members will appreciate the distraction.

The real tragedy of In Time is that this huge disappointment contains some brilliant ideas and devices. Which it should in coming from Andrew Niccol, the award winning screenwriter of The Truman Show and director of the underrated dystopian sci-fi drama Gattaca with which this latest effort shares thematic similarities.

The premise is that in the future, mankind or at least the kind of beautiful people that live in LA are genetically engineered not to age beyond 25 years (so no real change there then). Once you ‘peak’, you either die or continue ageing in years but not in appearance. But to live beyond a quarter century you have to earn time credits that get downloaded into a kind of digital pay-as-you-go meter display embedded into your arm.

Time credits can be added by making physical contact with someone else who is willing to donate or trade it or via an electronic top-up card style gadget, or by forcibly stealing it and of course the whole thing’s run by a corrupt big brother style state favouring the privileged few.

Timberlake plays Will Salas, a lowly worker in an impoverished zone of the city. Although anti-authoritarian at heart he toes the line until a twist of fate sees his mother die seconds before he can download spare minutes into her system. Now in a bit of a tizz and short on time himself he meets a suicidal benefactor who donates him a whole century and so he sets about living the high life whilst attracting the unwelcome attention of the Timekeepers who want his un-earned 100 year timeloan back.

He goes on the run, somehow with Sylvia Weis (Amanda Seyfried) the pretty daughter of the chief time banker and together they begin a Bonnie and Clyde style robbing spree donating days, weeks, months and years to those in need.

Despite the tedium I admit it's a nifty concept and even Timberlake passes admirably for a leading man, which isn’t really that surprising after he gave decent turns in Black Snake Moan and The Social Network. He’s perfectly watchable and in the few, all-too-brief action scenes he looks the part.

But the whole thing moves at a tenth of a snail's pace with lots of pointless waffle and little character development. Clichéd badly cast underworld figures turning up for a bit of a subplot don’t really move things along either and Cillian Murphy wastes his own precious talents here as chief Timekeeper in hot pursuit of our good-looking time bandits.

I detected traces of The Matrix, THX 1138, a tiny flavour of The Stepford Wives and a hint of Westworld thrown into the mix but a good hour or so into this sci-fi pudding it wasn’t even approaching a smidgen of the suspense those ageing classics still hold.

Noticing that half the audience like me were yawning, sighing and stretching I decided that In Time had absorbed too many of my own credits and I walked out. So whilst I didn’t save any journalistic integrity I did save approximately 1800 seconds. I traded them in for an early bus ride home and a nice cup of tea.