Film of the Week: Days of Heaven 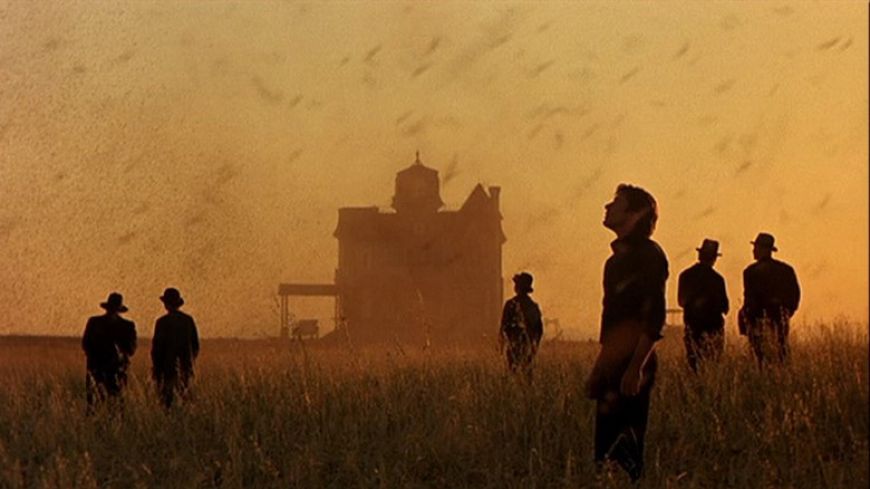 With an ear for natural dialogue and an eye for a natural performer Malick discovered the young Linda Manz to narrate one of the best screen voiceovers yet as well as playing a child’s perspective on the mysteries and follies of adult experience and the ebb and flow of nature.

And so just months after Terence Malick’s flawed masterpiece The Tree of Life which also documented childhood and the rhythms of life in painstaking detail, comes a new chance to see what many regard as the definitive film of his career, back on the big screen in a digital restoration supervised by the man himself.

It’s the work of a true and fussy auteur who got to make it his own way and in so doing created one of the most beautiful visual poems to ever grace the screen. Like many of his films, what Days of Heaven lacks in storytelling narrative is made up for in atmosphere; Nestor Almendros jaw dropping cinematography and the creation of one of the most unforgettable sequences ever filmed.

Essentially a document of a bittersweet love triangle, this a fairytale of innocence and survival on a grand scale and a snapshot of the grind of working men's lives just as the post industrial world and emergence of technology started to impact the landscape.

Richard Gere plays Bill, a young Chicago steel mill worker who after a violent altercation with a work colleague flees the city with his lover Abby (Karen Brooks) and their adopted ‘kid sister’ Linda (the film’s narrator). Along with hundreds of migrant workers they ride the train tops to the endless flowing sun drenched wheat fields of the Texas panhandle.

Reaping the harvest from dawn till dusk, the work is tough and the wages poor but these are the days of heaven, of youthful love and friendship and of a community both at odds with and at one with their working and natural environment. Overseeing this from his mansion, the rich and enigmatic farmer (Sam Shepard) takes a shine to young Abby. She pretends to be Bill’s sister and so the farmer sees no impediment to declaring his affections.

Events take their course and Bill and Abby see an opportunity for a better life by allowing themselves to be adopted into a rich man's life. Abby reluctantly marries into the household but as love rivals, the tensions between Bill and the farmer eventually culminates in tragedy.

This is a story in which the petty grievances, jealousies and needs of mortals ultimately play second fiddle to the indifference of the power of nature and its ability to overcome mans attempts to harness it. Just as events are heating up for the principal characters, a biblical locust storm takes over the land and the workers attempts throughout the night to protect their livelihood amounts to nothing.

Made in 1978, Days of Heaven has become a timeless classic. Exactly how the locust scene was created in a pre CGI era is beyond me and so the chance to see it again on a big screen in crystal clarity should not be missed.

There are many other memorable scenes, such as the opening titles and the train of workers silhouetted against the sky as it crosses a huge bridge. These and other scenes are accompanied by the haunting music of Saint-Saens Carnival of the Animals and the effect is that it all lingers in the mind long after the film is over.

As the saying goes, they don’t make them like that anymore and more’s the pity.