Film of the Week: Chasing Ice 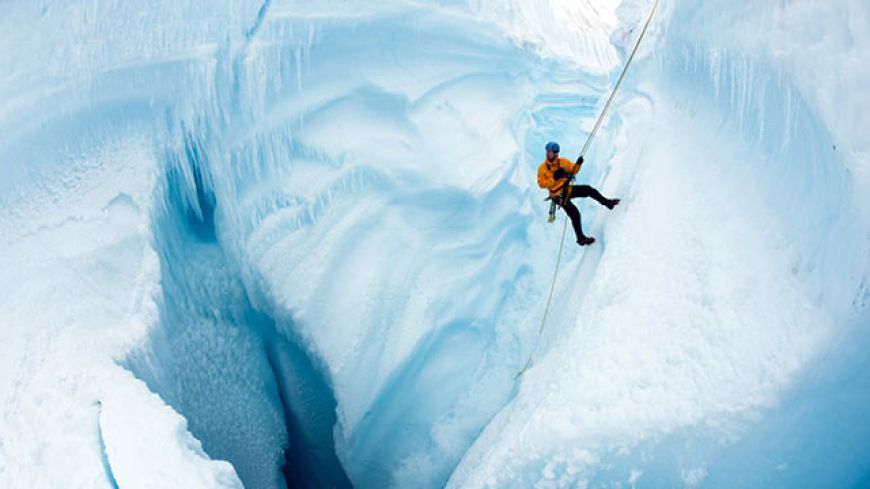 For this daunting task, Balog chose to focus on what is possibly the most visible and dramatic of climate change indicators - ice loss.

Balog and his team, the Extreme Ice Survey (EIS), set up their cameras in the frozen hinterlands of Iceland, Greenland, and Alaska, to capture the movements of giant glaciers over a period of many months and years.

In spite of months of preparation, the project was almost thwarted on the first attempt when the electronics seized up under the extreme Arctic freeze. The camera units recorded nothing but zigzags. It’s a situation that had the intense and driven Balog sobbing with frustration on the mountainside.

However, Balog and his crew persevered, gathering over the years some awe-inspiring imagery of glaciers at a time of accelerating retreat.

Some of this footage you can already find on the web from Balog’s TED Talk (view on TED) However, the short format and inevitable lower quality of these don't do full justice to the imagery (of which there is much more) and the stories behind some of those images - such as the massive Ilulisat Glacier ice carving event, which saw an ice block 3 miles wide and ⅗ mile deep disintegrate in just 75 minutes.

Chasing Ice reveals that it took EIS photographers months of camping out on the ice to capture the latter event (really a very little time when you consider that Thirties pioneer of ice cinematography Father Bernard Hubbard said he waited 8 years for this calving event, although not so long when you consider that EIS happened across an ice calving event while setting up on one of their cameras and ice watching has become a pleasure cruise activity. But I digress).

Much of the context for the impressive imagery in Chasing Ice is provided by Balog, a declared former climate denier who now sees a vital part of his mission as being to get the message out about global warming before it is too late.

Chasing Ice has some gorgeous and often arresting footage, a mixture of stills, video, and time-lapse, but often it takes a few words to explain the seriousness of the situation.

Sometimes it’s just Balog’s first response on retrieving his visual documentation: “If I hadn’t seen it in the pictures I wouldn’t have believed it at all,” he says, after looking at the photographs of the Solheim Glacier in Iceland, that had “deflated like a balloon”.

Other times it’s pointing out why a glacier’s surface looks like swiss cheese and the connection between the dark slime on the ice and power stations. Various climate experts provide additional helpful commentary and insights into the bigger picture.

Also the creative drive and intensity that Balog brings to his work, wading barefoot into icy waters for a better shot, or hobbling stoically across icefields with an increasingly debilitating knee injury, helps convey the sense of urgency. Brief interviews with supportive family members, suggest his obsession keeps him away from home for long periods.

It’s difficult to watch the disappearing ice giants of the polar regions without feeling a great sense of foreboding. Director Jeff Orlowski regularly reminds us that the team’s work has taken place in a cloud of denial and uncertainty about climate change, epitomised in the documentary by jump cuts through sceptical news reports and recent severe weather events such as hurricanes, droughts, floods, forest fires, and so on.

Given the lack of traction on climate policy, you have to wonder how seriously politicians take the science. This is especially true of the world's most powerful nation, after the deafening silence on climate change policy during the recent US presidential election campaign. That sense of frustration will be all the more acute after watching this.