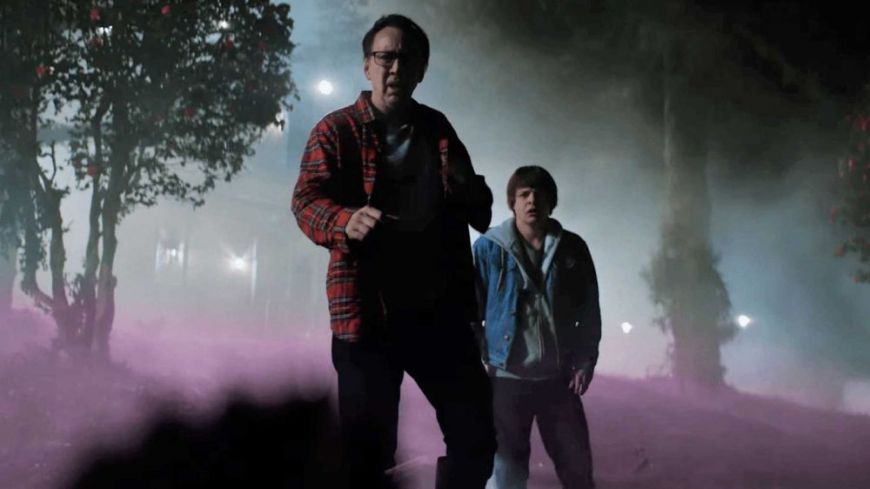 During Color Out of Space, a pulpy psychedelic monster B-movie directed and co-written by Richard Stanley, we spend 20 seconds watching Nicolas Cage slam-dunking peaches into a bin. A teenage boy spends 10 seconds passionately defending naming a cat ‘G-Spot’. A full minute is dedicated to an alpaca milking scene. Our time, it appears, is Richard Stanley’s for the wasting.

When a mysterious egg/meteor from outer space crashes in the front yard of Nathan Gardner (Nicolas Cage), strange creatures and environmental mutations start secreting forth. The titular colour that the egg/meteor emits is, as Nathan remarks, something he’s never seen before. But the problem with making a film about an other-worldly colour hitherto unseen by human eyes is that it’s remarkably difficult to put that on a screen. Nathan, you find yourself thinking, you have seen this colour before. It’s purple. And I know you’ve seen purple before, Nathan, because it’s the colour of your daughter’s hair.

Stanley has obviously been given free rein to be as weird as he wants, without any direction or limitations, and so the members of the Gardner family get high in the woods, practice amateur witchcraft and rear alpacas. The performances are universally wooden and underwhelming, as if Stanley has just politely requested that his cast acted instead of making a firm stance on the issue.

The opening shots of Massachusetts’s forest hills and composer Colin Stenson’s haunting and dreamy soundscape establishes a brilliantly moody atmosphere which is shattered as soon as the dialogue begins, with the earnest hydrologist Ward (Eliot Knight) happening across the teenage daughter Lavinia (Madelaine Arthur). Co-writers Richard Stanley and Scarlett Amaris have penned a script that is obviously indebted to H.P. Lovecraft (whose short story the film is based on) mixed with the small-town horror feel of Stephen King. There are gallons of B-movie material to spare, with edges of Extro and Re-Animator. Stanley makes no qualms about baring Color’s infleunces, and the weirder it gets the more engaging a film it is. But while I’m certainly glad that Stanley has seen The Thing, Poltergeist and The Shining, I’d much rather see something fresh (and no, a new colour doesn’t count).

It would be dishonest to say there’s no fun to be had. Cage’s delivery is, as usual, sublime – making even the most mundane of sentences gleefully unhinged. It’s entertaining to watch an oddball farming family from the middle of nowhere deal with an eldritch horror that unpeels their fabric of reality. The problem is it’s very hard to become invested in characters we’re laughing at, resulting in the most emotionally harrowing scene in the film being completely undermined by someone mentioning the word “alpacas”.

There are laughs, but the joke soon wears thin. There is nothing compelling about the characters except for the fact that one of them is played by Nicolas Cage. The stylistic predecessor to this film, 2018’s atmospheric and nightmarish revenge flick Mandy, had an explosive performance from Cage anchoring it as we descended into madness. With Color Out of Space we descend into boredom.