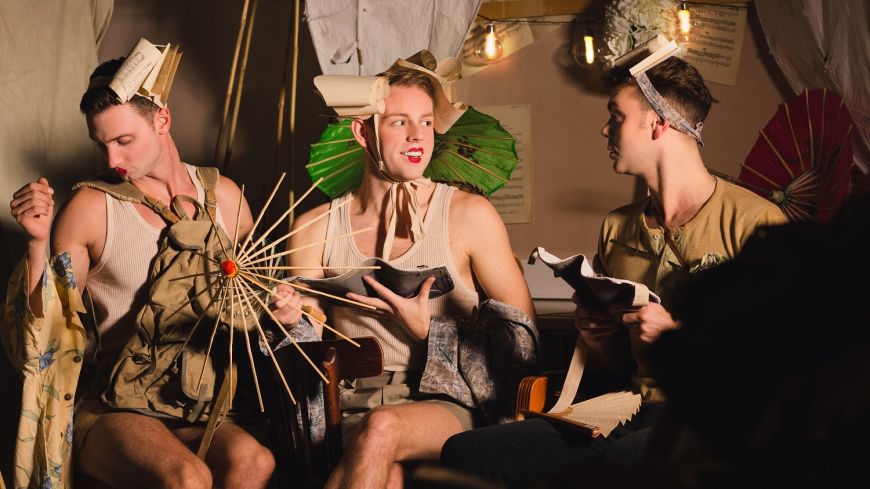 There was a time when the performance of a Gilbert and Sullivan’s operettas was de rigeur at the end of term. Think makeshift costumes, some questionable singing and the music teacher hammering the piano in accompaniment in the school hall.

Award winning director Sasha Regan has brought her memories of performing G & S at a single-sex school to create her own delightful send ups of these gender swapping roles in her All-Male Mikado.

In a new and radical version, she sets it at a boys’ school camping trip in the 1950s. The result is a cross between a Glen Baxter cartoon and a homoerotic version of Denis Potter’s Blue Remembered Hills and is as camp as the row of tents that form Ryan Dawson Laight’s ingenious set imbued with spirit of improvisation that permeates this production.

In the town of Titipu in Japan, it has been decreed by the Mikado (James Waud), that all flirting is punishable by death. His son and heir Nanki-Poo, stoutly played by Richard Munday, flees the court to escape an arranged marriage to his ward, the much older Katisha, played with understated style by Alex Weatherhill, and goes under the guise of a ‘second trombone’ in a band. He returns to Titipu as a wandering minstrel to find his true love Yum Yum (Alan Richardson) only to learn that she is promised to her ward Ko-ko (David McKechnie), a low life tailor who has in his absence risen ‘by a set of curious chances’ to the heights of Lord High Executioner and whose famous ‘little list’ has been updated to include garlic eaters, card sharps and modernist composers. So begins the ‘topsy turvy’ story full of sophistry, suicides and beheadings that goes through one ridiculous set of problems to another through song, wit and brilliantly tongue twisting word play while indulgently lampooning the English ruling class.

This enjoyable and well- loved silliness is brought to fabulous exaggerated life by the superb ensemble that tunes in to and acts out every well observed nuance. The details in the pre- wedding girlie primping scene as they sing Braid the Raven Hair are a joy to behold. And the whole score is sung beautifully with suitable falsetto voices where required with some skilful high kicking burlesque with the spirit of a school production kept alive by Musical Director Richard Baker’s impressive solo piano accompaniment while simultaneously conducting from the stalls.

From the wearing of tartan Glengarrys and the dancing of pas de basques to a Scottish Pooh Bah played with playful pomposity by Kirkcaldy born Ross Finnie in his plaid picnic blanket turned waistcoat; a Welsh Ben Vivian- Jones as the fussy Pish-Tush and the cricket bat wielding David McKechnie as a Cockney Ko-ko, this is (almost) a wholly embracing UK version of The Town of Titipu.

Among all this roaring daftness, towers straight faced Alex Weatherhill in socks and sandals and triple bonneted headgear like a harridan pope as the bicycling benighted Katisha, whose rendition of The Hour of Gladness still manages to come from the heart. His use of the bicycle pump as he sings Alone and yet Alive is comic genius.

Sacha Regan’s All-Male Mikado is a jolly jamboree full of boisterous (should that be boysterous?) infectious fun. A toe wiggling tonic!