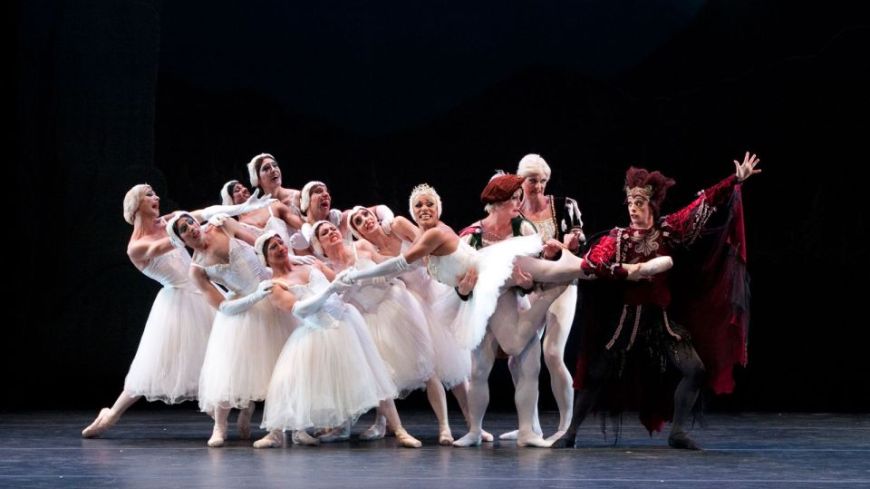 Since the first off-off-Broadway shows in 1974 as a radical, drag-dance comedy act, “The Trocks” have toured to 600 cities across 40 countries, with universal success. The ballet boys are back in town as part of an extensive UK Autumn tour.

Beloved for their hilarious homage and affectionate en travesti imitations of familiar clichés in romantic, Russian ballet, the dancers all have amusing drag queen names such as Minnie van Driver, Dmitri Legupski and Maria Clubfoot.

They kick off in sassy style with one of the most popular classic narratives, Swan Lake Act II, set to the sweeping score by Tchaikovsky.  With a painterly backdrop of a tranquil lake and mountain-top castle, Von Rothbart, the evil wizard, prances on to the stage sporting spiky copper hair and swirling a red cape. With magical powers, his outstretched fingers conduct a sudden flash of lightening, as he twirls around energetically - until he pauses, suddenly out of breath.

The arrival of Prince Siegfried ( an heroic and handsome Duane Gosa) gives the opportunity for a touch of pantomimic farce; the romantic Pas de Deux with the Queen, leads to the wild flapping of ‘her’ wing-like arms, as she rejects his advances, supported by a bevy of vicious Swans.   Rather than a silly spoof, the humour is based on the exaggerated characterisation of the Prince and Benno, his rival in love, in combat with the villainous Von Rothbart.

A highlight is the Dance of the Cygnets, a quartet with arms crossed, in a fast- paced, side-stepping routine. The slick, crisp choreography is spot on, apart from one dancer, whose head bends ever so slightly further back, his fumbling footwork a tad out of synch.

A Pas De Trois features two extremely tall dancers, towering en pointe over their partner, a diminutive guy who hardly reaches their shoulders, struggles to balance in twirling pirouettes or a series of lifts!.  The Dying Swan presents a dramatic star turn by Robert Carter, all flailing wings and moulting tutu feathers after being shot in the heart, collapsing in a heap but desperate to survive. Simultaneously, a laugh out loud moment, but also, due to his actorly skill, it's emotionally tragic.

With exquisite costumes, immaculate make up and wigs, the show clearly illustrates the vivacious versatility and technically proficient artistry of these classical ballet dancers.   However, a shame that it was not a more varied programme, such as including the modern Nightcrawlers - snazzy tuxedos and ballgowns - as seen in London.

There was a full house at the Festival Theatre with an enthusiastic audience of all ages from 8 to 80 for an evening of superlative dance as well as colourful, crazy, camp, comic entertainment. As the fan base of Trockaholics worldwide say, Keep on Trockin’!