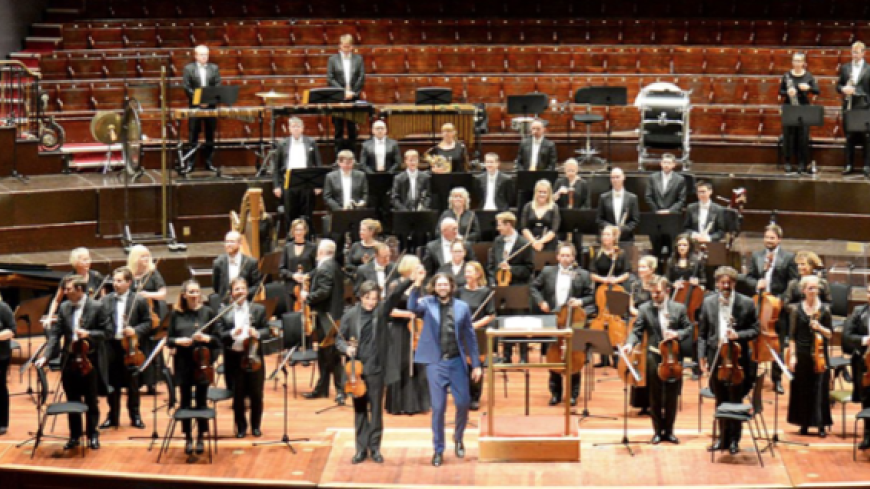 Oboe player Peter Dykes welcomed us, and Christian Reif came on stage to conduct Julia Perry's A Short Piece for Orchestra. Julia Perry, a composer of twelve symphonies and three operas, was able to combine her African American background with classical music. This work had its first performance in 1952 following time she had spent in Italy.

Friendly, and almost as if he knew us all, assistant conductor Kellen Gray had opened and closed the pre-concert talk. He was joined in the middle by conductor Christian Reif, recently directing the festival at Brainerd near where, as it happens, I was learning to water ski when two astronauts landed on the moon in July 1969. We were given an enthusiastic and thorough oversight of the evening's music. Asked about future projects, the conductor told us the imminent arrival of a baby son was to be his immediate preoccupation.

Erich Korngold's Violin Concerto draws on some of his film scores, probably the best known is The Adventures of Robin Hood of 1938. Award-winning American violin soloist Philippe Quint gave a first class virtuoso performance with the Orchestra quite rightly taking second place. He told us his well deserved encore was from Charlie Chaplin.

Dvorák's reputation in London was at a high when he came to write his Seventh Symphony in 1885 but the recent loss of his mother and  eldest daughter was in his mind. As with most requiems this work is in D minor. But far from restful, the Orchestra gave us all that was tempestuous just as the composer had designed. Christian Reif had told us that this was his favourite Dvorák symphony - and we certainly weren't disappointed.