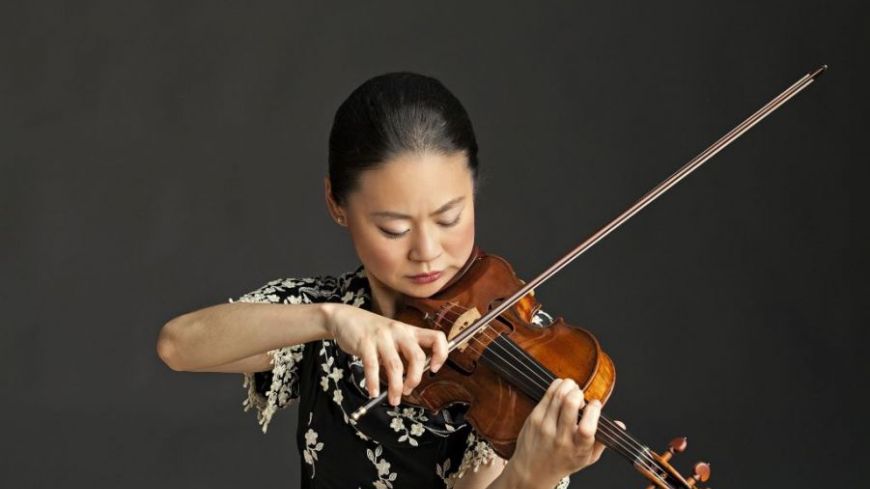 The lights dimmed rather more than usual; the conductor crept on stage and appeared to sit with the first violins. It was the fifth of November  But far from fireworks there was birdsong - swans busy chattering and then slowly, bit-by-bit, the digital music was accompanied by the orchestra. As the flock of swans gathered, their rising and falling in the sky was so vividly portrayed in music which increased in density. And then, eight minutes later the swans had flown away and all went quiet. This was the electroacoustic concerto Finnish composer Einojuhani Rautavaara wrote in 1972 for a university graduation ceremony in Northern Finland.

Music Director, Thomas Søndergård, accompanied highly celebrated violinist Midori to the stage for Detlev Glanert's Violin Concerto No 2 To the Immortal Beloved . Because of Covid-10 Tokyo's loss was our gain, for this was its world premiere. We heard an extraordinarily moving love story based on correspondence Beethoven had written in 1812 to an unknown lady friend; it didn't matter that he had not sent it. The three sections allowed Midori to recreate the diary-like manner of writing that Beethoven used. I was totally absorbed not just by the solo violin but by the adjacent tale the orchestra was portraying. It wasn't meant to be a Beethoven rewrite, but indeed it was most certainly a mature Glanert and well worthy of a second hearing. Detlev Glanert was there to take his bow alongside Midori at the end.

After the interval it was Lisa Rourke from the second viola desk who described the evening's content in the context of United Nations COP26, in progress in Glasgow. It seemed appropriate for Dvořák's Ninth Symphony From the New World to follow. Thomas Søndergård knows his team and they respect his leadership - in that partnership the audience was treated to a very fine concert.