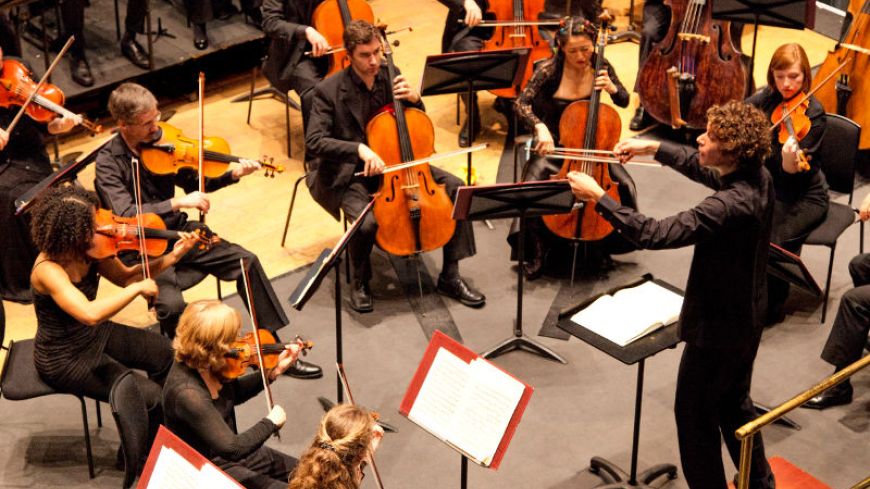 Last night’s concert at the Usher Hall was Robin Ticciati’s final concert as Principal Conductor of the Scottish Chamber Orchestra. He has been with them for nine years and has developed an excellent working rapport with the musicians, who will sorely miss him.

Three compositions were chosen to mark the occasion, the first being Johann Sebastian Bach’s Orchestral Suite No 4 in D. He wrote a total of four when he was in Leipzig – calling them Ouvertures.

Dance suites, in French Baroque style were popular in Germany in the eighteenth century, and they were performed in Leipzig’s coffee houses. The suites were specifically for listening, not for accompanying dancers. In five movements, they are the quintessence of classical music with their rigid rhythms. Perfect ensemble pieces, when Bach performed the suites he would have conducted from the harpsichord but as Ticciati is not a keyboard player he chose to create an intimate atmosphere by having the violin and viola musicians playing standing up. Also, the oboe players were seated at the front of the orchestra, rather than at the back, which enabled the audience to appreciate their trio in the Bouree second movement.

From Germany we went to America in the 1950’s. Aaron Copeland gained a reputation amongst his peers as the ‘Dean of American composers’ and his Clarinet Concerto has a fascinating history. In one movement, it was commissioned by the ‘king of swing’, Benny Goodman, and was premiered in 1950 on the radio – the first time that had ever happened with a major orchestral score. Maximilian Martin, the Spanish Principal Clarinet of the SCO, was the soloist. The haunting, ponderous introduction, reminding one of a vast prairie landscape, starts to transform from the cadenza into wild jazz like rhythms which the immensely talented Martin deftly played. With its mixture of classical and jazz influences as the piece progressed so too did the complex score for clarinet where Martin had to frequently hit incredibly high notes, which he did with great, accurate aplomb. What an accomplished player, under Ticciati’s guidance, he and the orchestra created a memorable performance.

The final piece on the programme was Antonin Dvorak’s New World Symphony. When it was first premiered in l893 in New York’s Carnegie Hall it received a rapturous response. His last symphonic work, it is one of the most popular of symphonies to be performed. He had been living in New York for a year working as the Director of the National Conservatory of Music of America and he claimed the symphony’s strongest inspirational source was drawn from Afro-American songs - the composer had come across them during his first few months in New York. “In the Negro melodies of America I discover all that is needed for a great and noble school of music.” (New York Herald, 21 May 1893). And in his endeavour to create the foundation for an American national school of composition he also incorporated the musical idiosyncrasies of American Indian music into this symphonic work. In four movements, the characteristic traits of the composition include a pentatonic five-note scale and syncopated rhythms.

With no score, Ticciati obviously relished conducting this vibrant piece with its continuous variations of tone throughout each movement which is extremely challenging for the musicians. Throughout his tenure as Principal Conductor of the SCO Ticciati has predictably elicited the best performances from the musicians and the rousing bars in the finale were a fitting farewell to his tenure.