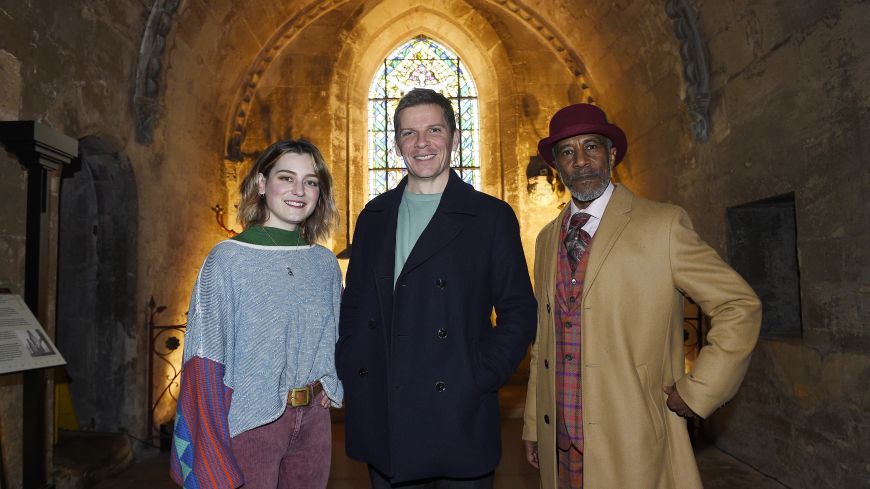 The stars of Capital Theatres' upcoming Da Vinci Code last week made a special trip to Rosslyn Chapel ahead of the play's run in Edinburgh next month.

Olivier-award winning actor Nigel Harman (EastEnders and Downton Abbey), Red Dwarf and Death in Paradise star Danny John-Jules and Edinburgh actress Leigh Lothian shares their thoughts on the iconic chapel, one of the most famous locations of the book, film and now this new stage adaptation.

Dan Brown himself said: ‘When I decided to write The Da Vinci Code, I knew that its finale would have to take place at the most mysterious and magical chapel on earth – Rosslyn.’

Nigel Harman said of his visit:

“It’s arresting and breath-taking to be in Rosslyn Chapel. We’ve been pretending to be here in the play for weeks now so to actually be here is a privilege of the job. This and the Inner Temple (also featured in the play) are two of the most extraordinary buildings I’ve ever seen.”

Danny John-Jules said of the visit:

“It’s going to be great to have a picture in your head of this incredible place while you’re acting.”

Leigh Lothian said of the visit:

“It’s quite overwhelming to be here. I’ve known about the chapel all my life but this is the first time I’ve visited. It’s stunning.”