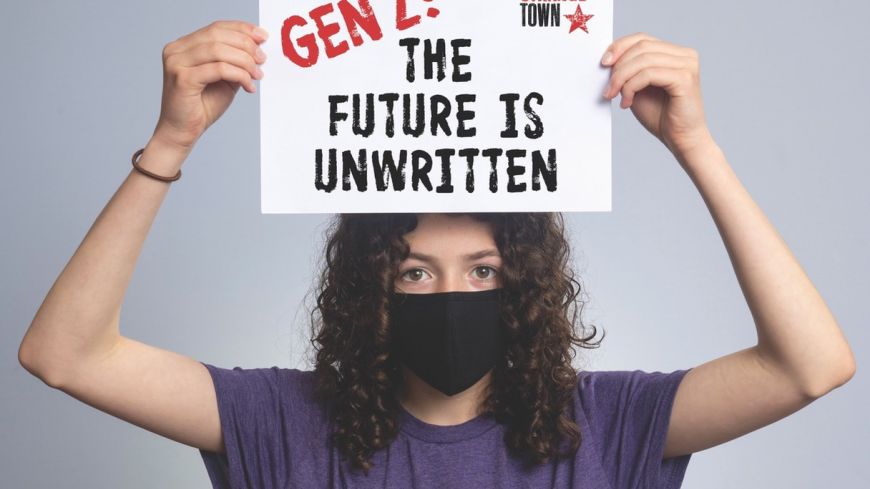 Covid-19 has provided a massive and prolonged dousing of cold water over the performing arts world as we all know, but the creative fires that have smouldered away all these months will, hopefully, soon flicker to life again in venues across the city.

In the meantime the (socially distant) show must go on, with this week an intriguing  large-scale, multi-artform project by 120 Edinburgh young people aged from 8 to 18 years old taking place at Out of the Blue Drill Hall.

‘Gen Z: The Future is Unwritten’ is a socially distanced promenade show performed by members of Edinburgh youth theatre company Strange Town. It takes the form of three 20-minute parts: live performance, film, and audio. It will be performed three times a night in three separate spaces. The whole audience will come together to experience a live performance from just six actors before being split into two separate groups to watch film and listen to audio material.

As well as the indoor promenade performance, the project also has a film component that features a snippet of Strange Town youth theatre’s work projected on a wall next to the St. Andrew, Ukrainian Catholic Church of Our Lady of Pochaev, on Dalmeny Street. The 8-minute projection features specially choreographed movement and will be showing on the 17, 18, 19 June every 15 minutes 9pm-10.45pm.

The project will also appear online with bonus film content on the 25th and Sat 26th June.

All tickets are being sold on a ‘Pay What You Can’ basis and must be booked in advance.

In the project, Strange Town’s eight youth theatre groups respond to the question  “can young people change the world?”

As children of the internet age, the youth of today are probably better equipped than most to work with the social and technological demands imposed by the lockdown restrictions.

For example, over the five month period, 70 of the young performers found themselves rehearsing choreography over Zoom and recording their final performance on their mobile phones.

The eight groups have been meeting for weekly online digital drama workshops and face-to-face creative sessions, where possible, to explore the project's theme and to create, write, film and record material.

“The Gen Z project is a testament to the hard work put in by everybody involved in the company,” said Steve Small, co-creative director of Strange Town and project producer.

“Despite the challenges and difficulties of the pandemic, watching the enthusiasm, skill and pride with which the production team has undertaken this task and having seen how the young people have adapted and risen to the challenge, as well as the range and quality of the work they’ve produced, it’s impossible not to feel massively encouraged.”