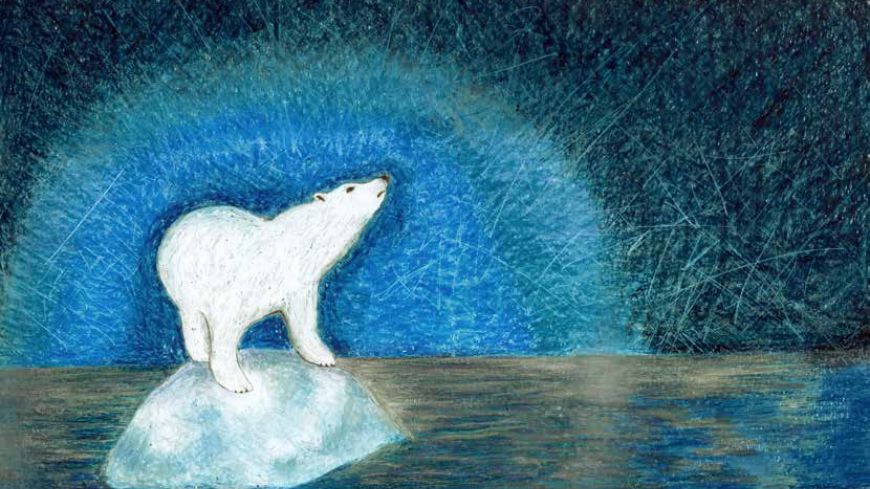 Different artists create the First Minister’s Christmas card design each year and the original image or images are then auctioned for charitable causes.

This year’s card features a polar bear perched on a melting block of ice, surrounded by a rich blue halo in a shape of a Christmas snow globe.

Arctic Polar Bear on Melting Glacier will be auctioned next year with the proceeds going to three charities – The Glasgow and Clyde Rape Crisis Centre, the Marine Conservation Society and the Friends of Victoria and Whyteman’s Brae Hospitals.

Polar bears are one of the most iconic species threatened by climate change. Climate change is amplified in the Arctic. As the ice gets thinner, with longer summers, polar bears are having to swim further to hunt for seals, the mainstay of their diet, or scavenge on the mainland. Many are starving and malnourished, and polar bear populations have fallen significantly as a result.

“Climate Emergency is the most prescient issue for the sustainability of our planet so I wanted to use the image of a stranded polar bear balancing upon a melting glacier,” said Lennox.

She added: “While the drawing looks to all intents and purposes like a classic children’s storybook illustration, this is actually what’s taking place in the real world. Perilously so. Lots of human beings still don’t believe in Global Warming, but they believe in Santa Claus.”

The climate denial lobby has been promoting the idea that polar bears are not affected by rising temperatures.

First Minister Nicola Sturgeon said: “I am thrilled to have such a beautiful and eye-catching picture for my Christmas card this year. Annie Lennox has done a fantastic job at making the card feel festive while also reinforcing an extremely important message which is relevant all year round.”

The First Minister added: “We must continue to live up to our responsibility to tackle the global climate emergency, it is not too late to turn things around but to do so will require transformative, collective change.”

“Christmas is a time for giving and what better gift can we give future generations than a better world? That is why we have committed to end our contribution to climate change completely within a generation.”

Lennox said she was “most heartened that Scotland’s First Minister fully endorses the messaging behind her Christmas card for 2019.”

The First Minister’s card is being released as the world’s governments wrangle over terms and tougher carbon-reduction targets at the COP25 climate summit in Madrid.

The meeting, like so many before them, appears to have fallen short of expectations, with hopes that the next climate summit, COP26, which is being held in Glasgow in November,  will bring forward an agreement to speed up the transition to a low-carbon, global economy.