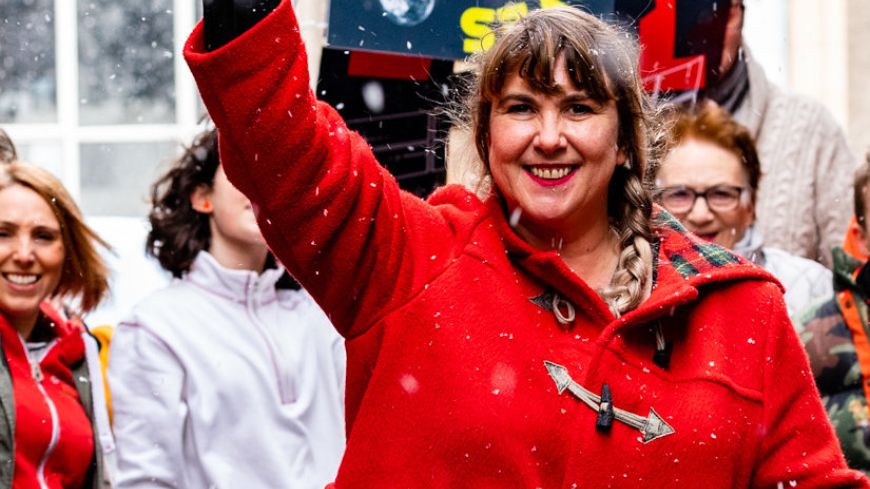 In the sphere of climate change, 19th century Irish physicist John Tyndall (1820-1893) is a giant. Tyndall made pioneering studies on the heat-trapping properties of carbon dioxide and water vapour in the atmosphere, and was one of the first scientists to recognise the natural greenhouse effect in moderating the planet’s climate.

His work in atmospheric physics is so highly thought of, that the UK’s internationally-renowned research facility Tyndall Centre for Climate Change Research carries his name.

Amanda Tyndall, director of the Edinburgh Science Festival, shares the same surname but is she related?

“I would love to claim that I am, but it’s probably unlikely,” she says.

Ms. Tyndall’s family on her father’s side is also from Ireland, and she worked at the Royal Institution in London, where John Tyndall lectured over many years. A colleague doing a PhD on the eminent physicist even thought she bore a slight resemblance to a later-life portrait of the professor with his bushy, lamb-chop whiskers.

“I didn’t know quite how to take that,” she says, with a laugh.

Joking aside, names have become a serious matter of concern when I reach Tyndall to talk about climate change coverage at this year’s Edinburgh Science Festival.

The festival, which Tyndall has helmed for the past seven years, officially starts tomorrow (Saturday 6th) and runs to 21st April. Coming into sharp focus are the names and logos of sponsors that emblazon the festival brochure, publicity boards and marketing materials produced for the 270 events and 31 festival venues this year.

It’s Tuesday afternoon and Edinburgh Science, the organisation that runs the Edinburgh Science Festival, has just released a statement saying it will no longer accept sponsorship from “fossil fuel companies and their primary trade bodies.”

This will be the last year that the charity welcomes oil and gas multinational Total as a “major funding partner”, one of the top nine sponsors to support Edinburgh Science’s schools outreach programme called “Generation Science”.

ExxonMobil and the Scottish Oil Club will also cease to be partners when the programme wraps for the year in May.

“They provide free shows to schools of social and economic deprivation largely in the North East of Scotland,” says Tyndall, who sees the shows continuing in future years nonetheless.

“In terms of our overall sponsorship mix it’s not insubstantial, but it’s not something that the dropping of will jeopardise our organisation’s activity.”

According to Edinburgh Science’s sponsorship literature a “major funding partner” title accreditation such as Total’s starts at £20,000 and assures “prominence across Festival branding”. A drop in the ocean for oil and gas behemoths, who have covertly spent millions over the years propagating disinformation, doubt, denial and delay around climate change.

According to a new report, the biggest five oil and gas corporations are spending $200m (£153m) a year to delay and stall climate action.

So why has Edinburgh Science been so cosy, for so long, with these companies?

“We have believed for a long time - and still do believe - that these companies need to build a role in this transition to more sustainable futures, but they’re not moving quickly enough and they’re not responding with the level of urgency that we think is necessary,” says Tyndall.

To its credit the festival has given a platform to leading, international experts in the climate change field like former NASA scientist James Hansen, Professor Chris Rapley, and this year Christiana Figueres, who was instrumental in brokering the international Paris Agreement.

Yet, at the same time, an event about rapid de-carbonisation, 12 years to save the planet, features the UK head of Siemens Power & Gas. Elsewhere, among the many hands-on activities for kids is role-playing an oil explorer which involves building a scale drilling rig (Geo Explorers, City Art Centre, 6th April).

“These energy companies have undoubtedly been part of the problem, as we all are as consumers, but they also have a role to play in some of the solutions,” says Tyndall, suggesting a conglomerate like Siemens, which also makes wind turbines, can help us visualise the low-carbon transition.

Climate activists have not been impressed and have been increasing pressure on Edinburgh Science to divest itself of its fossil fuel sponsors. Last year, activists protested the Science Festival’s Ecoville, described as a “family-friendly low carbon village”.

Earlier this year, activist group Science Unstained warned Edinburgh Science that it would organise actions at this year’s festival protesting the sponsorship deals with ExxonMobil and Total. They see the festival as being exploited  to greenwash Big Oil’s corporate brands.

Tara Wight, of Science Unstained and PhD student at the University of Edinburgh, puts it this way:

“By being associated with science outreach events, fossil fuel companies aim to clean up their image and present themselves as responsible organisations that are in alignment with scientific consensus on climate change. Fossil fuel companies have known about the science of climate change for decades, yet instead of taking action they have continued to expand and intensify the extraction of fossil fuels, while funding misinformation in the media.”

It is against this backdrop of heightened concern about the fragility of the planet, with striking school children marching around the world for greater climate action, and experts on climate mitigation from Working Group 3 of the UN’s International Panel on Climate Change (IPCC) meeting in Edinburgh this week, that Edinburgh Science has shifted its position. Its statement on Tuesday read:

"We routinely review our sponsorship policy and have recently decided that we will no longer seek sponsorship from fossil fuel companies.

We are extremely grateful to the fossil fuel companies we have had productive relationships with over the last three decades and especially for their essential support for our schools touring programme Generation Science. Their generosity has enabled us to work with tens of thousands more children across Scotland than we could have done without their support, many of these in rural parts of the country. They have been good partners whose commitment to the organisation has been to enable us to encourage more young people in to science and technology.

With the issues of climate change ever present and urgent, we feel increasingly compromised by the conflict between accepting sponsorship from fossil fuel companies and programming events that scrutinise the main causes of climate change. The UN Intergovernmental Panel on Climate Change (IPCC) calls for a dramatic and immediate reduction in the amount of fossil fuels consumed if we are to keep global warming to no more than 1.5 deg. centigrade. This calls for a step change in the way the world uses fossil fuel and therefore the way the companies that extract them operate. Whilst we see change happening in the oil and gas sector and appreciate that the demands on them are complex, we are of the view that the sector is not moving fast enough to meet the IPCC targets and that there is a conflict between their behaviour and the underlying science.

Climate change is without doubt an urgent threat of unprecedented magnitude and Edinburgh Science is committed to doing all that it can to bring it to the world’s attention through its festival and learning programmes."

While Edinburgh Science has divested of oil majors Total and ExxonMobil, it’s not strictly speaking the end of all fossil fuel sponsorship. Fossil fuelled industries are just too ubiquitous, it would seem.

Says Edinburgh Science: "We define a fossil fuel company as one whose main business activity is the extraction of fossil fuels."

The key word is "extraction".

You don’t need to dig far to find other fossil-fuelled sponsors. Its headline sponsor EDF Energy uses 7% coal and 9.39% gas in its energy mix. The bulk of its energy (71%) is nuclear.

Another sponsor is OPITO - which provides skills for the oil and gas industry (the acronym stands for “Offshore Petroleum Industry Training Organization”).

Then there’s aviation, an industry which is expanding, rather than shrinking, its carbon footprint. Short haul airline Ryan Air is now one of the top 10 carbon emitters in the EU beaten only by 9 coal power plants (see Ryanair is the new coal).

To be clear, Ryanair is not an Edinburgh Science sponsor, but it flies to 45 short-haul destinations from Edinburgh Airport, which is a sponsor: the headline sponsor for Edinburgh Science’s new community engagement activities in 2019.

It’s notable that Deputy Director of the Tyndall Centre, Professor Kevin Anderson, who was among those calling for Edinburgh Science’s fossil fuel divestment, has been one of many climate scientists criticising frequent and unnecessary flying.

The Science Festival has some excellent in-depth talks and panels covering all manner of subject matter ranging from astrophysics to video-gaming. But taking place over the spring holidays, the Science Festival has generally come across as a fun, hands-on, educational jamboree for school kids featuring slime, blood, (pretend) body parts and the like.

This year Edinburgh Science’s target audience (or at least a portion of them) seem to have turned the tables on the adults. Inspired by Greta Thunberg, they are demanding crisis-level action on climate change.

“I’m really, really encouraged they are taking this level of initiative and speaking their mind,” says Tyndall. “A lot of my friends have teenage kids who were at the march. I spent the afternoon looking at all the pictures that were coming out of the Edinburgh march and the placards that they’ve made and the passion that is there and the commitment to change.”

She adds: “I can only hope that their voices have more power than the voices of science have had to date.”

Tyndall describes herself as an optimist when it comes to climate change. “I don’t think that we are past the point of no-return,” she says.

But the scale of the climate crisis, the thorny ethical and practical issues around financing and putting on climate science shows presents a clear challenge for the curator.

There are few overtly climate change events at the festival, though Tyndall hopes to lure and engage new audiences in science in general “by stealth”.

An example she cites is the exhibition A Human Touch, outside the Scottish Parliament building, which people might accidentally bump into. There are also workshops and events that in passing might introduce budding engineers to the clean technologies of the future.

"I feel that the message that we have to put out as a science festival is that there is still hope - we know that doom and gloom scenarios do not necessarily empower people to make meaningful change," says Tyndall. "If we can give people access to the right sorts of information, in the right sort of way, then they are better equipped to have a voice in these decisions and not be swayed by hype or hysteria."