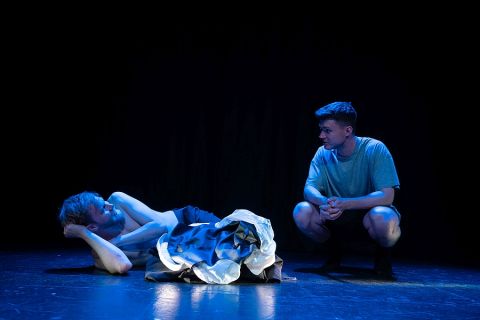 There is a need for a word in taxonomy, and in medical genealogical, scientific, biological literatures which does not occur in the English, or any other, language. A word to designate the last person, animal, or other species – the last of a line, the last survivor of a species. “Endling”.

A lone figure is here to stop.  Animal, vegetable, mineral?  It appears that he is a human animal, all the same genes as others, not necessarily in the right order.

This isn’t an A to B story but looks at how we as humans have come to a point where 120 species have reached extinction in the last decade and what that implies for times to come.

Our guides go through metamorphosis to form animals, legs bending at seemingly unnatural angles and skittering to chitinous, insectoid sounds. Some of these creatures had crispy skins, others made good soap. They resume human form as hunters, sighting animals as taxidermy trophies or subjects for clinical trials. As music hall entertainers they look at how we anthropomorphise animals with little understanding.

It's important to remember the last of things and easy to forget.  In a dystopian future they struggle to remember the very words for land, sea, and sky. If nature encroaches on that human habitat what might the solution and outcome be?

This is a good-looking show with masterful movement aided by lighting and sound to create an often-unsettling atmosphere. Utilising facts and some verbatim extracts it remains quirky and often amusing but does become a bit of a lecture in the latter stages, pushing home a point already made which could be elucidated more dramatically.

It's a timely reminder that there are no happy Endlings.