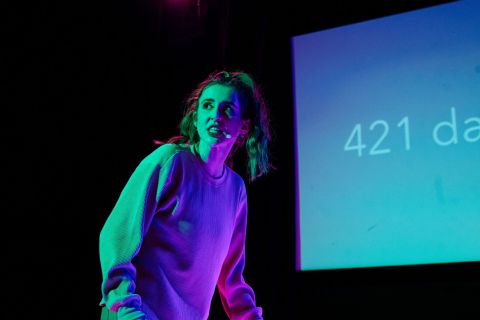 Ruckus: ‘a row or commotion; a noisy fight or disturbance; a state or situation in which people are angry or upset.’

Ruckus is inspired by real women and real stories taken from charities such as SafeLives, and reports from investigative journalists to create an accurate, experiential play. Coercive control is hidden behind closed doors yet its side-effects kill up to three women every week in the UK.

‘824 days to go’ flashes in bold on a large screen at the back of the stage as a 20 something girl in peach coloured shorts and sweatshirt, explains “I‘m going to tell you everything, just watch.”

Lou is, at first, all bubbly and smiling, relating the story of being chatted up by the charismatic Ryan, with the manners of a true gentleman. She loves her work as a primary school teacher, her best friend Jess is getting married and life is rosy with a YOLO attitude.

And so we follow the challenging, chilling timeline of their relationship, as Ryan becomes more domineering and demanding. Ryan appears only as a voiceover such that great skill and split second timing during heated conversations and arguments, and gives the effect of his reverberating voice in her head.

This is a covert type of psychological abuse, the cruel manipulation and control over her movements and social life. He hides toy animals around the house which she must find before he returns home, slowing driving her insane. But despite his bullying behaviour, she still seems to trust and love him.

As the action moves back and forward, Jenna Fincken is simply breathtaking in the way she shifts in just a moment from capturing Lou’s happy and carefree personality to an almost hysterical breakdown. Energetic choreographed scenes take us on this time travelling journey but, confusingly, there’s no apparent, neat denouement leaving unanswered questions at the end.

Similar psychological crime dramas are the subject of popular TV series following the gradual scenario between perpetrator and victim. Instead of six episodes, Lou’s story is related in just one intense hour: a truly thrilling emotional rollercoaster of a ride.